Supermassive Wolf-Rayets go up in blaze of supernova glory

Astroboffins have confirmed for the first time that Wolf-Rayet supermassive stars can die in a violent explosion known as a Type IIb supernova, using a global rapid response protocol to capture the moment. 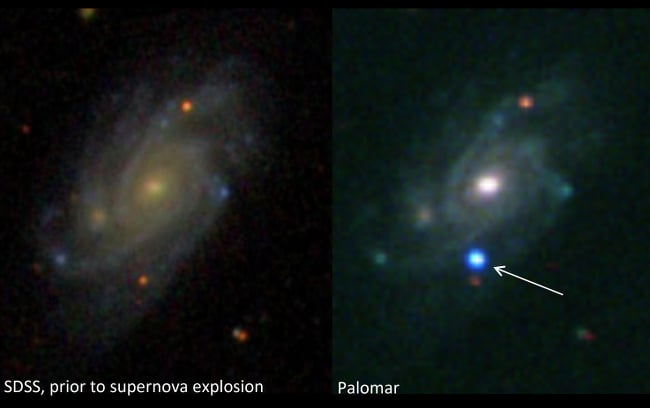 The life and death of stars is an endlessly fascinating subject for astroboffins, since it’s this activity that enriches galaxies with the building blocks for life, but a number of stars and supernovae are still a mystery.

By the time the light from a spectacular stellar explosion reaches Earth, the action has already happened, making it difficult for astronomers to figure out which stars create which type of supernovae.

Cosmic behemoths known as Wolf-Rayet stars, which are twenty times more massive than the Sun and at least five times as hot, are particularly compelling objects for study, as they contain heavy chemical elements that will eventually become bits of planets.

"We are gradually determining which kinds of stars explode, and why, and what kinds of elements they produce," said Alex Filippenko, Professor of Astronomy at UC Berkeley and co-author of the study. "These elements are crucial to the existence of life. In a very real sense, we are figuring out our own stellar origins."

Only some supermassive stars become Wolf-Rayets in the last stages of their life, making them relatively rare. That’s why when the Palomar 48-inch telescope at the intermediate Palomar Transient Factory (iPTF) in California spotted a Type IIb supernova, the team sprang into action.

The iPTF team is always on call, which allowed one member in Israel to put out an alert about the discovery, getting another ready with the spectrum analysis on the Keck telescope in Hawaii before the Sun rose.

When a supernova explodes, its flash ionises the immediate surroundings, helping astronomers to figure out the chemistry of the star that exploded. But the ionisation only lasts for a day before the blast sweeps it away, making it crucial to get telescopes trained on the spot as quickly as possible.

“Newly developed observational capabilities now enable us to study exploding stars in ways we could only dream of before. We are moving towards real-time studies of supernovae," said iPTF team leader Avishay Gal-Yam, from the Weizmann Institute of Science in Israel.

Supernovas occur when a stars core collapses, sending a shockwave out into space carrying all of the remains and debris. All stars spend their lives fusing hydrogen atoms to create helium, but supermassive ones are different.

If the star becomes more massive, wielding more gravity, that fusion is accelerated in a process that will eventually lead to gravitational collapse. When the hydrogen runs out, a supermassive star can continue to fuse heavier elements like carbon, oxygen and sodium, until its core turns to iron.

At that stage, the only thing holding the star together is quantum mechanical law that stops two electrons from occupying the same quantum state, since fusion is no longer energising the star. Once the core becomes even more massive, even that won’t work anymore and the star collapses.

The Wolf-Rayet phase comes in just before the star goes supernova. As the fusion is slowing down, heavy elements created in the core start rising to the surface, setting off powerful winds, which throw material out into space and hide the star from telescopes on Earth.

"When a Wolf-Rayet star goes supernova, the explosion typically overtakes the stellar wind and all information about the progenitor star is gone," said Peter Nugent, who heads Berkeley Lab's Computational Cosmology Center (C3) and leads the Berkeley contingent of the iPTF collaboration.

"We got lucky with SN 2013cu—we caught the supernova before it overtook the wind. Shortly after the star exploded, it let out an ultraviolet flash from the shock wave that heated and lit up the wind. The conditions that we observed in this moment were very similar to what was there before the supernova."

Before it was too late, the iPTF team managed to get chemical light signatures with Keck and then follow up 15 hours later with observations from NASA’s Swift satellite. In the following days, the team got telescopes all over the world to watch the supernova, getting as many readings as possible.

"This discovery was totally shocking, it opens up a whole new research area for us," said Nugent. "With our largest telescopes you might have a chance of getting a spectrum of a Wolf-Rayet star in the nearest galaxies to our Milky Way, perhaps four million light years away. SN 2013cu is 360 million light years away - further by almost factor of 100.

"Ideally, we'd like to do this again and again and develop some interesting statistics, not just for supernovae with Wolf-Rayet progenitors but other types as well," he added.

The full study, "A Wolf–Rayet-like progenitor of SN 2013cu from spectral observations of a stellar wind", was published in Nature. ®

Years after we detected two neutron stars crashing into each other, we're still picking up X-rays. We don't know why

Wondering where the strontium in your old CRT monitor came from? Two colliding neutron stars show us