Video I, for one, welcome our new insect overlords … a collaboration between researchers in Vienna and the US has produced high-resolution laser-control over fruit flies.

If you have access to the necessary kit (cameras and a galvanometer) to track the fruit fly (Drosophila melanogaster in their experiment), plus a 635nm and a 808nm laser, you can try for yourself, since the software has been published here.

As the researchers put it, FlyMAD “is a system for targeting freely walking flies (Drosophila) with lasers. By steering the optical path of the laser using large diameter mirrors, it also enables simultaneous imaging of the target region. This enables through-the-mirrors (TTM) targeting of specific body parts. Together, all this allows rapid thermo- and opto- genetic manipulation of the fly nervous system.” 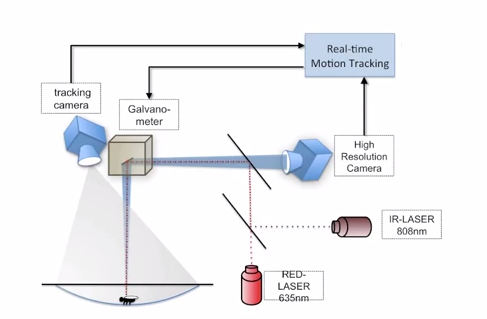 Because, as they explain in the abstract published in Nature Methods, researchers modulate the activity of defined neurons to investigate “the circuit mechanisms that shape behaviour.” In other words, if you've got a fruit fly in front of you and the right equipment, you can watch what happens when you fire off individual neurons.

The relatively simple brain of the fruit fly makes it a popular subject for such investigations, but there's a problem. Heat is typically used to fire neurons, but the time it takes for them to “fire” makes for a fuzzy signal: “A limitation of these thermogenetic approaches, however, has been their poor temporal resolution,” the researchers, led by Andrew Straw of the Research Institute of Molecular Pathology at Vienna Biocenter, write.

Hence the lasers, which can finely-target a neuron and heat it up quickly. The FlyMAD setup heats the target area by 30°C, according to RedOrbit.

Working on regions associated with courtship and “singing” (Drosophilia's mating song comes from its wings), the researchers fired neurons that resulted in a “mating attempt with a ball of wax while simultaneously vibrating their wings in such a way to create their mating song.”