Dog bites man: The more right-wing you are, the less you think humans are toasting the planet

A recent poll has discovered that – in one US state, at least – climate change is now a more divisive issue than even the long-bubbling "pro-choice/pro-life" and gun-control dust-ups.

The poll, conducted in January and February of this year by the University of New Hampshire's Carsey Institute and released last week, found that the further to the right a Granite Stater's political persuasion, the less likely they were to trust scientists as a source of information about environmental issues.

The Institute did discover, however, that scientists are trusted not only by a majority of Democrats and Independents, but also by Republicans: a full 60 per cent of members of the Grand Old Party trust scientists on environmental matters.

Couple that number with the 31 per cent who answered "unsure" or don't know" to the question, "Would you say that you trust, don't trust, or are unsure about scientists as a source of information about environmental issues?" and only a mere 9 per cent of Republicans don't trust scientists about the environment.

That's certainly higher than the 1 per cent of Democrats who feel that way, but it pales in comparison to the 43 per cent of those who support the Tea Party who don't trust their white-lab-coat-wearing brethren. 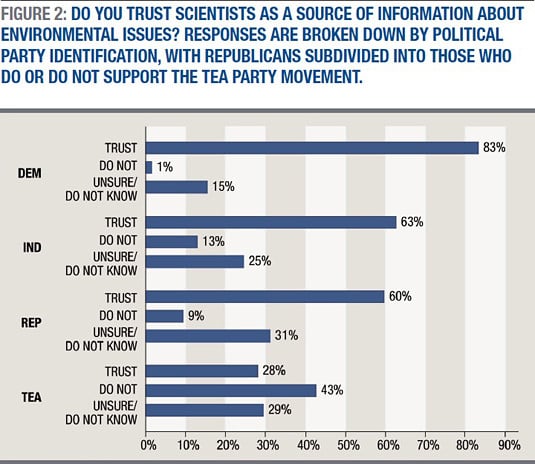 "The problem with climate change is there's never been a day in the history of the world
in which the climate is not changing," says Tea Party favorite Senator Ted Cruz (R-TX).

When the pollster – Lawrence Hamilton, professor of sociology and a senior fellow at the Carsey Institute – drilled down further into the beliefs of 568 randomly selected New Hampshire residents, he was able to calculate just how much Republicans and Democrats disagreed about different issues of the day – such as the abortion, gun-control, and climate change disputes mentioned above.

Hamilton discovered, for example, that there was a 53 percentage point difference between Republicans – Tea Partiers included – and Democrats when it came to belief in human-caused climate change. That's higher than their disagreement about such hot-button issues as gun control – 44 per cent – and abortion – 35 per cent.

As to whether those fine New Hampshire folk believe in evolution, well, results were a bit surprising – to this Reg hack, at least. When asked, a full one-third of Tea Partiers answered in the affirmative to "Human beings evolved from earlier forms of life, in a process that took millions of years," while an equal percentage of Democrats put their faith behind "God created human beings pretty much in their present form within the past 10,000 years or so."

No surprise in President Obama's approval ratings, however: 80 per cent of Democrats gave a thumbs up when asked, "Generally speaking, do you approve or disapprove of the way Barack Obama is handling his job as president?" Among Tea Partiers, his score was zero, zip, zich, and nada. ®

Republicans believe in 'climate change' but not 'global warming'

Democrats believe in it no matter what it's called

Of those who have an opinion, over 97% say we're to blame

Refreeze the poles... giant magnifying glass... What shall we do?