It's limited good news for Elon

Where does the Li lie?

There are two main sources at present and over the decades we tend to swing back and forth between them. Certain minerals (like spodumene) are rich in Li, so we mine them. Certain brines also have plenty of it. That brines are rich in Li gives us a clue that the oceans might be a possible source. And they might not be: it may not be economical at anything like current prices but it's certainly technically feasible to extract from the Atlantic.

Given the simply gigantic size of that last number, total resources, we're simply not going to run out of lithium for batteries. Most especially since we'd not need to have a constant stream of new material: once we've got some billions of car batteries then we'd obviously be reycling them anyway.

We might though think that resources aren't going to be enough for us to reach that nirvana: at which point let me tell you what the mining industry is really all about. You might think it's about digging out those reserves and resources, but it's not – not really. It's about working out new technologies which turn those "total resources" available into either resources or reserves. Another way to put this is that the mining industry creates minerals by inventing the technology that moves them from being metal containing dirt over into being ores.

One example of this is a little programme I am vaguely involved in on the German/Czech border. There's a local form of mica called zinnwaldite (after the German village where it was first found, Zinnwald, or “forest of tin”). The twin Czech village is Cinovec, or “place of tin”. (They were really inventive with place names around here.) Zinnwaldite is about 1.3 to 1.5 per cent Li. So could an economic process be found to extract this Li? The answer is yes, it could. It took about two years to work it out but it works... well sorta. If you've got this mica available to you (and there's plenty in local slag piles) then it's economic to process it. But it's not economically viable to go hard rock mining to dig it up to then process it.

So we could say that this particular attempt to move dirt over into ore isn't quite successful. But there are hundreds of attempts to do this with all the different possible resources every year. That's actually what one entire end of the mining industry attempts to do. And given the truly vast numbers of those total resources, we only need a small fraction of such attempts to succeed in order to provide us with the reserves and resources that we'll actually go on to use. 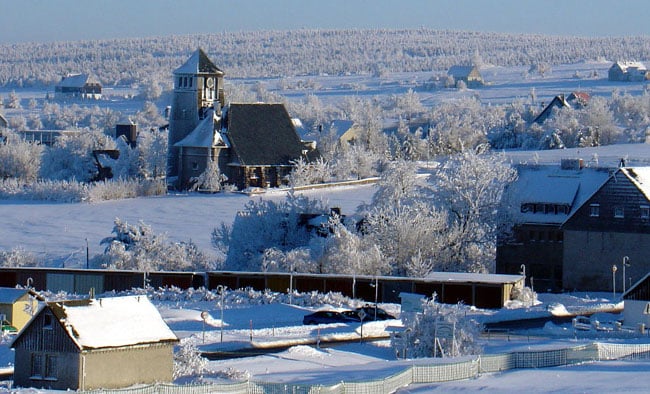 Underneath the pretty landscape of the German/Czech mining village of Zinnwald/Cinovec is rich tin-laden soil. Photo by Jens Jäpel, licensed under Creative Commons

Is there enough lithium to keep those gigafactories running? Sure, for there's really no shortage of any element on this planet of ours. The only real shortages we might have are in the human ingenuity to extract, economically, the elements that we already know are there. ®

*Apparently enough that Musk asked for my advice once on a technical point but it was only the once.