Sony Xperia Z2: What we REALLY thought of this Android fondleslab

Faster, thinner, lighter – yet how much has the price changed?

Review While Sony seems wedded to a six monthly update cycle for its flagship smartphones – we’ve had the Xperia Z, Z1 and Z2 in the last twelve months – its tablet release schedule is a tad more leisurely. The impressive Xperia Z tablet rocked up in June 2013 and now, just shy of a year later, we have an update: the Z2 tablet. 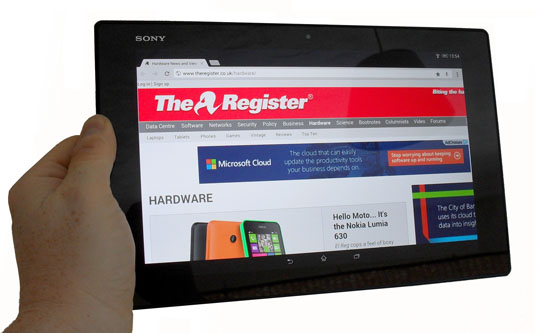 Er, so what happened to the Z1 Tablet? Nothing, there is no such thing. The Z2 moniker is being used here simply to make the marketing pitch tie up more neatly with the Z2 phone. If Sony had used the more obvious Z1 name punters would suspect that Sony’s new tablet was a generation behind its new smartphone.

The big deal with the original Xperia Tablet was how thin and light it was and the Z2 improves upon this by even thinner and lighter still. At 6.9mm the Z Tablet was the thinnest fondleslab around but the Z2 is half a millimetre thinner and at 426g a rather remarkable 69g lighter. Unless you’ve handled a Z2 Tablet, it’s nigh on impossible to get an idea of how almost supernaturally thin and light it feels. It makes the iPad Air, let alone the Samsung competition, feel both leaden and lumpen. 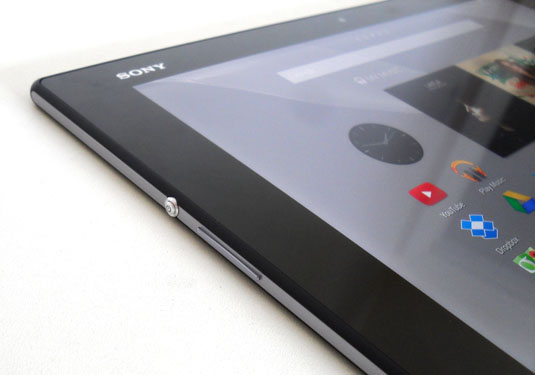 Albeit thinner, the Z2 sticks with the Omni-Balance aluminium frame

The essential design of the Z2 is much the same as the original Z but that’s no bad thing. The Omni-Balance aluminium frame is still in evidence, which makes it a handsome device and, more importantly, a very solid one. Actually it feels rather more solid than the Z Tablet, with less flex in evidence when you really twist it. There is perhaps a wee bit too much bezel in evidence, especially at the sides, but I presume that’s a side-effect of being so slim – the innards still have to go somewhere. And at least it gives you someplace to put your thumbs that isn’t screen.

A small change, but for the good, is to be found at the back. Out goes the toughened glass rear to be replaced by a soft, matte-effect plastic panel. This is more pleasant to the touch, less prone to smudging and I suspect less likely to crack if dropped. Sony has also moved the micro USB and memory card/SIM slots from the bottom to the top of the device, a change I heartily approve of. 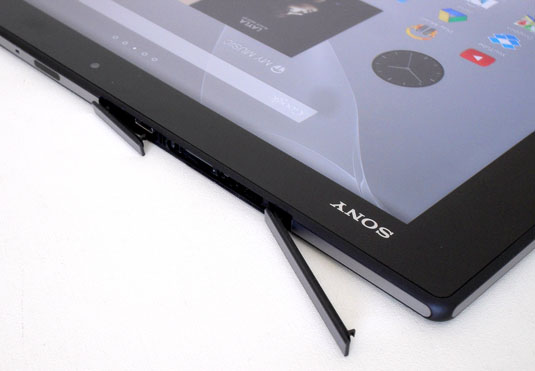 Things are still not perfect though. While the 3.5mm audio jack is no longer hidden away beneath a waterproof cover, it has been moved from the left hand side to the bottom. That’s where the pogo pins are so you can’t plug in your headphones if the Z2 is sitting in its optional dock unless they have a right-angle or short jack. My Sony cans have the former, my Sennheisers, however, do not.

Sticking to matters audio, Xperia devices, be they phone or tablet, have traditionally had weak loudspeakers but the Z2 Tablet attempts to remedy this by moving the stereo monitors from the bottom edge to the front, where they are considerately positioned low enough down to avoid being covered by your hands. 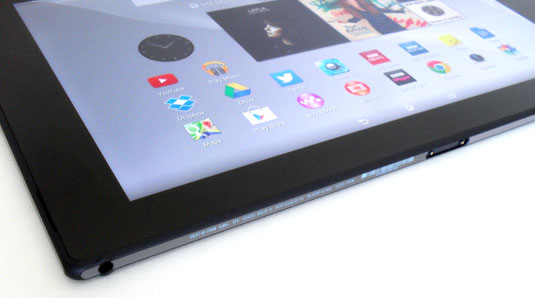 3.5mm jack and dock pins both a the bottom... hmmm

This change represents a useful step forward but there is still an overall lack of volume, even if Sony’s S-Force surround sound system makes what there is impressively expansive. The lack of volume is more than likely a side effect of the dust and waterproofing, bumped from IP57 on the Z Tablet to IP58 on the Z2.