What can The Simpsons teach us about stats algorithms? Glad you asked...

No, not the Simpsons – Simpson's Paradox

The dictionary defines a paradox as an absurd or seemingly absurd or contradictory statement that might prove to be true and when it comes to data a seemingly contradictory situation can arise when you're collecting and comparing data.

It's a rather subtle problem, something that can quite easily catch you out, and it's called Simpson’s Paradox*.

Imagine you work at an advertising agency and are closely involved in an ad campaign for client A. You measure the amount spent on the campaign in specific areas and also the effect it has (increased sales of product Z, predictably).

At the end of the campaign you plot advertising spend against sales and produce a graph with a lovely line showing a positive correlation: the more your client spends with you, the greater the effect of the advertising. Let’s take it as read that not only is there a correlation (as one number increases, so does the other), but that causation is also at work. That is, you also prove that the act of spending more on advertising really is directly causing the product to sell better. 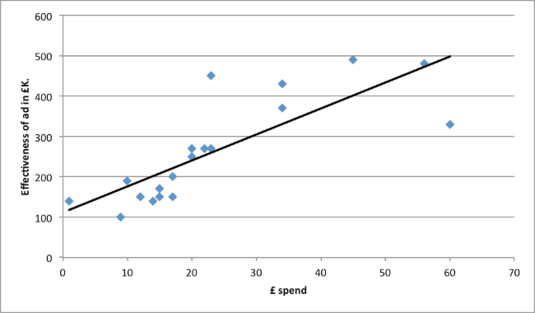 You move on to work for client B, one with deeper pockets, and run another ad campaign. Again you measure spend and effect and again you produce a genuinely accurate plot showing a positive correlation; and again you can prove causation. 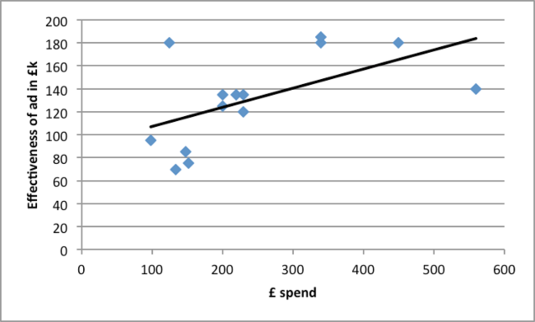 Now you’re pitching to client C and want to show that spending more gives better results, so what better illustration than to combine the results from the previous campaigns (anonymised, of course) into one show-stopping graph in your presentation? You plug in the numbers, create the graph and – aargh! Suddenly you have a negative correlation, showing that spending more money on advertising has a negative effect on sales. 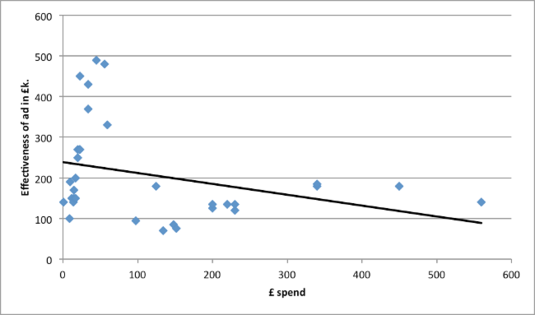 How can this be? Two positives can’t combine into a negative, surely? And that’s Simpson’s Paradox in a nutshell.

To resolve the paradox it helps if we first colour the data points from each data set, so we can see what’s going on. 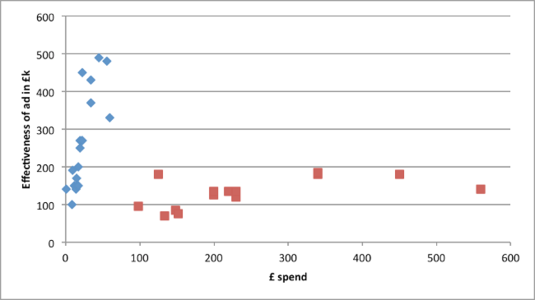 The first data set had a relatively low spend and a high return, the second a much higher spend and, on average, a much lower return. To illustrate why this causes the negative correlation when they are combined, we can calculate an “average” point for each set of data. (I am not recommending this as a statistical test, merely a way of illustrating what is going on).

The next question might be “Well, why are these averages so different?”

The answer is that while the two have certain similarities (we know the advertising spend and we can measure the effect), in reality a great number of factors may be very different.

Next page: They look alike
Page: