100% driverless Wonka-wagon toy cars? Oh Google, you're having a laugh

Right, who nicked my drone-delivered pizza?

Where the robotics will be accepted, at least initially, is as land-bound drones doing short-haul freight. “Professions like taxi driver, pizza delivery driver and lorry driver all have one thing in common. Sadly, driverless cars will lead to job losses on an epic scale,” predicted one newspaper.

Even here, there’s some exaggeration. Fancy a free pizza? Follow a Wonkamobile for long enough and it will stop. There’s your pizza. Perhaps Google will have to arm the Wonkamobile with Tasers.

A huge amount of trivial human labour is actually needed for delivering things in life. Things like Authentication – like checking the person who ordered the pizza is the one who gets it. Things like allowing for Contingencies – for example leaving the parcel with a neighbour... but not any old neighbour. So while it clearly makes sense to have robots doing deliveries, the Wonkamobile project people don’t seem to have thought this through.

Even if we could replicate the serene test conditions of Mountain View’s test tracks and largely empty lanes in London or Paris, the space isn’t there to do it. It’s too congested. 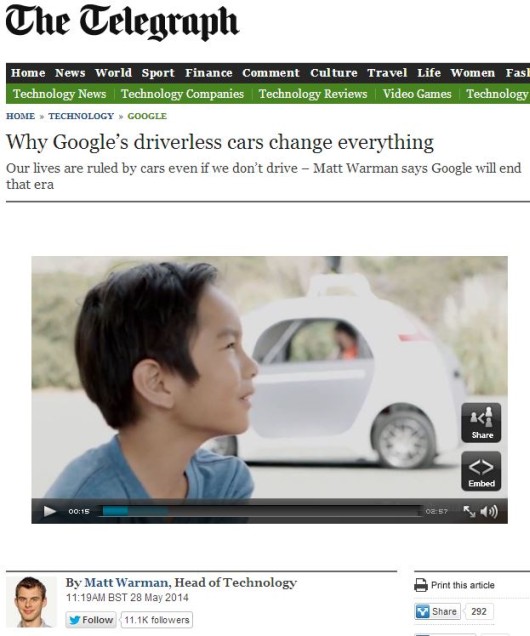 Despite what you’ve just read, I’m generally quite bullish about commercial robotics. Robots doing simple menial things is very much business as usual. But for a 100 years we’ve projected our fears and fantasies onto robots.

Here’s another fantasy. Wouldn't it be convenient to fall asleep in your chair, wake up in the pub, have a few pints, and then wake up at home in the same chair? The Google driverless car is really not a car at all, but an armchair with wheels that could (theoretically) do just that. But just because I want it to happen doesn’t mean it will happen. At least not any time soon. ®