Pics + Vid Elon Musk has unveiled the manned rocket he hopes will win his upstart rocket startup SpaceX the contract to ferry ‘nauts to and from the International Space Station – and set humanity on the path to Martian colonisation.

Musk lived up to the Tony Stark comparisons with a glitzy ceremony to literally unveil the Dragon V2 taxi-craft. Cheering crowds of staff and reporters stood underneath a scorch-marked Dragon cargoship suspended from the ceiling while thumping music played, and a large screen counted down the curtain drop.

With the curtain down, and the new rocket revealed, Musk announced that the V2 can transport up to seven ‘nauts, with an improved heat shield capable of withstanding temperatures up to 5,000 degrees Fahrenheit (2760°C) and four legs for soft landings instead of ocean drops, which will ensure the capsule can be reused.

“You can just reload propellant and fly again. This is extremely important for revolutionising access to space. So long as we continue to throw away rockets and spacecraft, we will never have true access to space, it’ll always be incredibly expensive,” he said.

The Dragon V2 can, we're told, land even if two out of its four engines fail, and it can deploy parachutes if it detects anything wrong with the propulsion system before it comes in to land. The propulsive system coupled with the four extendable legs are what will allow the craft to ease onto any landing site, according to the space firm.

“You will be able to land anywhere on Earth with the accuracy of a helicopter,” Musk boasted. “That is how a 21st century spaceship should land.” 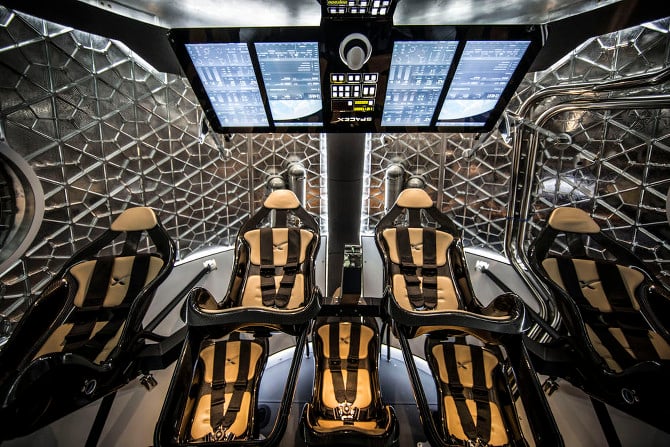 The inside of the seven-seater, manned SpaceX Dragon V2

The Dragon will also be capable of docking autonomously or under pilot control with an orbiting space station, rather than needing a robotic arm to guide it in. Inside the craft, the pilot can control critical functions using buttons, while other systems are accessed using giant touchscreens, all located on a panel that swivels into place in front of the seats.

SpaceX has previously stated that its Dragon technology should get ‘nauts onto the surface of Mars as well. Musk has frequently talked about his ambitions to get a colony on the Red Planet within the next decade and how a safe, reusable rocket system is an integral piece of the puzzle.

To get the V2 off the ground is going to cost about a billion dollars, with approximately half of that coming from NASA, which could see the first crewed mission as early as 2016, depending on how well the money flows from the US government in the next couple of years.

SpaceX is hoping that its success with its existing cargo Dragon vehicles, and its plan for reusable V2 capsules, will win it the bulk of the upcoming contract with NASA to provide a space-taxi to the ISS. The firm is in competition with two rivals, Boeing and Sierra Nevada Corp, to become the new go-to guy for manned craft, although the agency could choose to divvy out the spoils among them.

NASA has already spent about $1.2bn (£720m) helping the three competitors to develop their rockets, while the firms have invested hundreds of millions of dollars more. 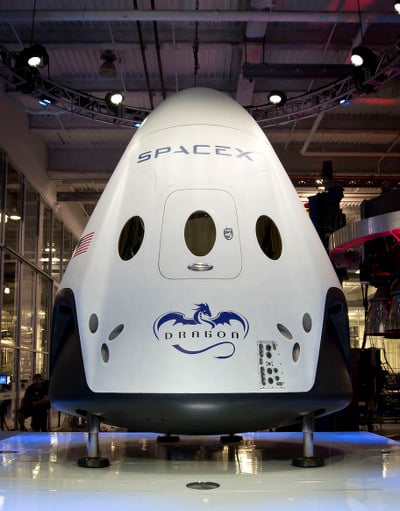 Outside the SpaceX seven-seater Dragon V2

The agency is expected to make its decision on where to put the rest of its cash in the next couple of months, a goal that’s taken on new urgency given how things stand with the Russians. The US is entirely dependent on Roscosmos to use its Soyuz craft to get crew members up and down from the International Space Station, but that relationship has become shaky in the last few weeks as Uncle Sam imposed sanctions on Russia related to the crisis in Ukraine.

Earlier this month, Russian deputy prime minister Dmitry Rogozin threatened to ban the US from the space station, saying that while his country’s half of the ISS could operate with America, NASA ‘nauts would be lost without Roscosmos.

"We've repeatedly warned our colleagues at the political and professional levels (via the Federal Space Agency) that sanctions are always a boomerang," Rogozin said.

"They always come back around and are simply inappropriate in such sensitive spheres as cooperation in space exploration, production of spacecraft engines, and navigation, not to mention manned space flights." ®