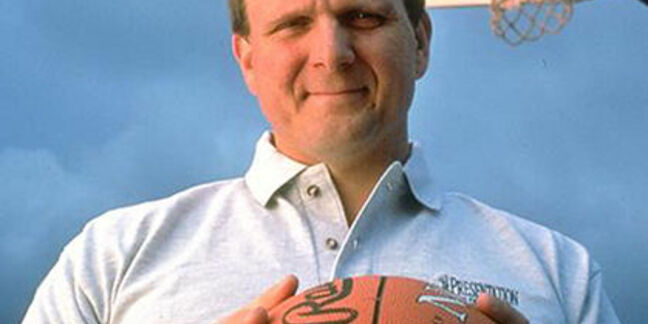 Updated Former Microsoft CEO Steve Ballmer might not be in the software business anymore, but he has reportedly still found a way to one-up longtime rival Larry Ellison: by outbidding the Oracle tycoon for a major US sports franchise in the form of the LA Clippers.

According to a report in the Los Angeles Times, Ballmer has won a brief bidding war to become the new owner of the Los Angeles Clippers basketball team, beating out a consortium that included Ellison, record producer David Geffen, and TV chat host and publishing queen Oprah Winfrey, among others.

Ballmer's winning bid was reportedly $2bn, 248 per cent more than the $575m value that Forbes reckoned for the team this January. The Ellison/Geffen group's bid was said to be $1.6bn.

The former Redmond exec's princely sum makes the sale the second priciest in US sporting history, after the 2012 sale of the Los Angeles Dodgers baseball team for $2.1bn. By comparison, the most expensive sports team in the world is the Real Madrid football club, which Forbes values at $3.3bn.

Not that Ballmer can't afford it. His personal net worth has been estimated at close to $20bn, with $13.2bn of that tied up in Microsoft (of which he is the largest individual shareholder).

Ballmer was previously involved in a failed bid by a group led by himself and hedge fund manager Chris Hansen to buy the Sacramento Kings basketball team in 2013. He was ultimately outbid by Vivek Ranadive, founder and CEO of Tibco Software.

At the time, Ballmer said he planned to move the Kings to Seattle, Washington, which currently doesn't have a basketball team and is but a stone's throw from Redmond. But the National Basketball Association's board of governors ultimately nixed that idea, and Ballmer has reportedly said he will keep the Clippers in Los Angeles.

That's if the sale actually goes through, mind you. The deal still must meet the approval of the other NBA team owners – though that might not be hard to get, given how they must be salivating at the thought of how the Clippers' sale price would boost the value of their own teams.

More to the point, however, the sale must be approved by current Clippers co-owner Donald Sterling. The negotiations were conducted by Sterling's wife Shelly, who also has a stake in the team. But the Sterlings' hands are being forced by the NBA, which banned Donald for life after his mistress publicized a phone conversation in which he made racist remarks.

Sterling – a former attorney – has remained characteristically recalcitrant throughout the ordeal. On Tuesday, his lawyer Max Blecher told ESPN that Sterling planned to "fight to the bloody end" with the NBA, and late on Thursday afternoon he told the sports network that he had still not signed off on any sale of the Clippers. ®

Sterling's estranged wife, Shelly Sterling, reportedly told CNN today that she had signed a binding contract to flog the franchise to Ballmer for $2bn.

When the world ends – coronavirus plague, WW3, whatever – all that will be left are cockroaches and Larry Ellison trash talking his rivals