For your next privacy panic, look no further than vending machines

SMILE! You're on candid Coke-cam! No. Make that coffee-cam. Or surveillance cam?

If you're looking for a future privacy panic, look no further than the coming wave of PC-powered pic-snapping age-guessing vending machines.

The idea behind such machines is simple: if you can pop a PC inside a vending machine you get the ability to manage it more effectively and to measure which goods are selling well or poorly. A PC is also easily capable of driving a giant screen on the front to display animations that entice passing punters to toss in a coin or two for a nutritionally-dubious snack.

Developers have, however, taken the idea a little further by including cameras.

At a recent Microsoft-hosted demonstration in Sydney, Vulture South beheld a fridge made by local the local Coca-Cola bottler that was able to take a shot of people in the vicinity, superimpose a silly wig on their heads and exhort them to buy a drink. All without obscuring the sweet, sweet, beautifully chilled beverages within, thanks to the use of a clear display.

Yesterday in Tokyo*, Intel showed off a vending machine demonstration unit that uses a camera to guess at the gender and age of the person standing in front of it, the better to target animations. The demo suggested men might be offered coffee, while a young woman might be offered something that's more their cup of tea.

Your soon-to-be 46-year-old correspondent snapped the meta-selfie** below of the system in imperfect action. 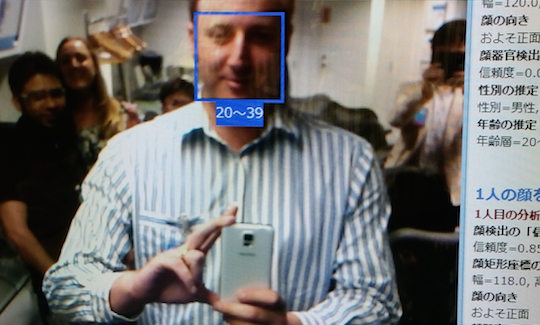 Anyone building such a machine would presumably be savvy enough to crunch the numbers and figure out the average age of those likely to use it, to better target the inventory on offer. The agency that built the Australian coke machine certainly had data acquisition in mind.

Pressing technology into the service of commerce in such ways obviously creates the potential for privacy concerns. The thought of a fleet of vending machines owned by a single company recognising regulars as they move through a city is a scarifying surveillance scenario.

To be fair, the Microsoft and Intel demos Vulture South has witnessed were all about selling stuff, not tracking buyers. Both also pointed out that some interactivity and connectivity help to improve the operational and commercial performance of the otherwise humble vending machine. That a large-screened vending machine also has the odd spare second to display third-party ads also scored a mention to point out the revenue-raising potential of such devices.

Yet your correspondent has a horrid feeling it probably won't take long before a brand takes this all a step too far and whips up a nice privacy panic.

* To where your correspondent travelled as a guest of Intel, which showed off lots of PC-powered digital signage all over the Tokyo underground.

** Sorry for coining that term. I promise only to use it when strictly necessary