Hybrid array high-flier Nimble Storage has upped its revenues by 110 per cent annually - but deepened its losses by 109 per cent, as it eschews profits for growth.

The chart shows a nice regular picture of revenues and losses. 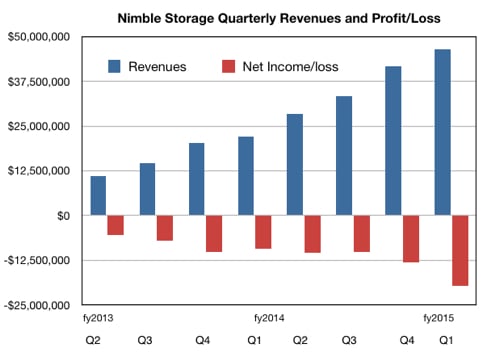 In a shareholder letter Nimble says its key product initiatives are:

About the new high-end product, expected on June 11 by Stifel MD Aaron Rakers, the letter says:

We are also very excited about a new high-end platform that went into beta at the end of Q1 and is due to be launched and become generally available during Q2. This platform will offer the performance of flash-only arrays, while improving $/performance and retaining our leadership on $/GB

The outlook for next quarter is for revenues between $49 million and $51 million - and another loss. Profits may not come until fiscal 2017.

The claim that Nimble makes about having the leading flash storage platform means it sees itself competing with all-flash arrays (AFAs) as well as other hybrid flash/disk arrays. If it really can offer all-flash array performance with a big slug of disk capacity then that would cause problems for the AFA camp.

Another year and Nimble could be a half billion dollars/year revenue company. How long before the majors really do sit up and take notice? Nimble is intent on killing them and, so far, has not put a foot wrong. ®