Taipei's tech malls are less than sum of their parts

Computex Preview Taiwan has a thoroughly deserved reputation as one of the world's technology dragons, as shown by the fact its annual Computex show is probably behind only Las Vegas' CES in terms of significance to consumer technology.

Computex is why I've come to town. Trying to get a feeling for host city Taipei is why I arrived two days before the show.

This year Computex starts the day after the Duanwu Festival, a day celebrated by Chinese around the world and set aside for dragon-boat racing. Taipei feels primed and I'm told huge crowds will line the river here.

The city is teeming, perhaps as a result and perhaps because it's the kind of megalopolis in which apartments are small and public space therefore takes on greater importance. Whatever the reason, every train station, every tourist spot, every shopping precinct has a steady and sometimes choking flow of people moving through it. With daytime temperatures at around 30˚ C and humidity at a level I just don't want quantified. It's not an easy place to stay cool.

Guang Ha which is nestled between a main road and a freeway. Like almost everything in Taipei, a bilingual signpost at the nearest metro stop makes it easy to find.

That sign directed me up an alley lined with technology shops and guarded by Seagate-branded signs. The idea of a street market appealed, but this turned out to be just an outlying area cashing in on Guang Ha foot traffic.

The mall itself was rather duller: it's a six-storey affair with a small food court on the ground floor. At ground level you'll also find lots of shops that display lots of kit but won't sell it to you. 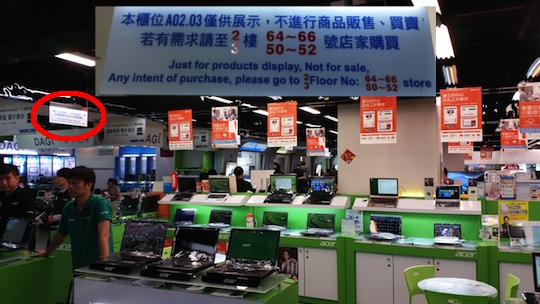 If that sounds a little odd there's an explanation: ground floor stores are showrooms only. Commerce is done upstairs in shops presumably operated by the same folks controlling the ground-floor showrooms.

Taiwanese brands have pride of place. Acer, ASUS and Gigabyte are more visible even than Samsung. Dell has a ground floor outpost but HP is absent. Apple pops up in many shops but Sony gets more signage. Japanese camera brands aren't hard to find. Memory and disk bands are unusually prominent.

Most of the people in the Plaza are young men, but more than a few are there with sisters, girlfriends and wives: an afternoon here seems to be something mundane for locals.

The higher you go, the geekier things get. The ground floor is all about laptops with some cameras. And more mobile device cases, in more styles, than it seems possible will ever be sold. Never mind sold profitably.

By level two shops with long lists of component prices posted outside are starting to appear. On level three small baskets of plugs and adaptors make themselves apparent and more network-attached storage becomes evident. By level four the consumer tech is thinning out as security kit like cameras and walkie talkies appear.

Level five offered some software and DVD shops, all selling kit that was adorned with Chinese characters but, like everything else in the Plaza, was sold at disappointingly familiar prices.

Next page: Be there pirates?
Page:
Corrections Send us news
6 Comments