A research group at Delft University of Technology has set the lesser-brained among the world's science writers in an absolute tizz by demonstrating what it describes as reliable quantum teleportation.

Of course, mention quantum phenomena like entanglement (and therefore teleportation) and the only angle anyone can think of is “Einstein was wrong”, as if the whole idea were new.

Unless they're completely off beam and think this is the first quantum teleportation ever.

(It wasn't helped by the university playing up the Einstein angle in its media release linked below).

Entanglement has, of course, been around so long that it's exploited in commercially-available systems like quantum key distribution systems. If quantum computer outfit D-Wave is to be believed – it's just had a paper escalated to the august pages of Physical Review X – then entanglement has been observed inside its machines.

Its paper, published at Science (abstract) and available in pre-print version at Arxiv, claims not to be the first information teleportation, but rather the first reliable teleportation.

That makes error rates a problem: noise destroys entanglement, and if you're communicating information via quantum states, that might mean dozens of states have to be prepared and measured. 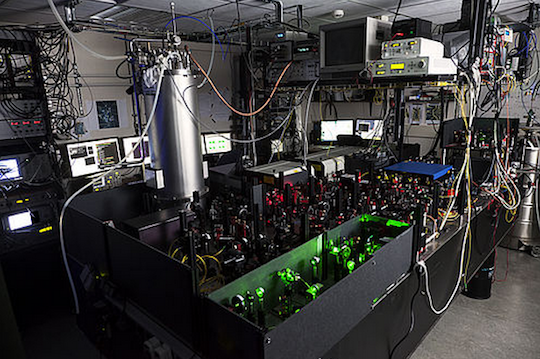 As Hanson says in the release, “The unique thing about our method is that the teleportation is guaranteed to work 100 per cent. The information will always reach its destination, so to speak. And, moreover, the method also has the potential of being 100 per cent accurate.”

The research group used electrons in diamonds on chips separated in the lab.

“We use diamonds because ‘mini prisons’ for electrons are formed in this material whenever a nitrogen atom is located in the position of one of the carbon atoms. The fact that we're able to view these miniature prisons individually makes it possible for us to study and verify an individual electron and even a single atomic nucleus,” Hanson said.

The researchers used the spin state of electrons to demonstrate and measure entanglement: if the spin was changed at one end of the experiment, it was measurable at the other end without having somehow “crossed” the space between the two electrons.

The demonstration involved preparing the teleporter setup, and then encoding a state onto the nuclear spin. “We preserve the target qubit's coherence by dynamical decoupling while the measurement outcome is forwarded and the final correction pulse is applied. This protocol ensures that the source state is successfully teleported in each of the experimental runs,” they write.

The next step will be to extend the distance to 1,300 metres within the Delft campus, the group says. ®