Adjusting to life with Chrome's disease

I tried out an SD card from an audio recorder and opening up an MP3 on the Chromebook fired up the basic music player and the rest of the files appeared in a ready-made playlist. BBC iPlayer and YouTube played nicely, as expected, but you won’t find any Dolby Theatre or DTS Studio sound enhancement apps bundled here. 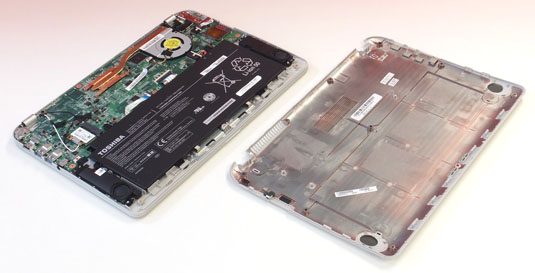 If you’re keen, there’s the Chrome Audio EQ for HTML 5 content and a couple of basic audio editors. That said, the Toshiba CB30 delivers a robust sound output. OK, so it’s not booming with bass – what laptop ever does? However, those front underside speakers are loud and clear, which is better than most.

Like many, I prefer matt screens to shiny ones, which was one of the reasons why I was so taken with Acer C720 Chromebook, along with the compactness of this 11.6in model. With the Tosh book, you get a not overly reflective panel that doesn’t have particularly special viewing angles, as shading soon creeps when you’re off-axis.

Given it’s a laptop, using it a lot at odd angles really depends on the user, but in sitting positions the display tilt is laid back just enough to make sure you get a decent view at different proximities. The Toshiba TruBrite screen appears pin sharp and, fortunately, given the name, there’s a good level of brightness behind it too.

The full-size HDMI port provides the option of using another display at 1080p, and there’s a 3.5mm mic/headphone combo port to handle headsets if you’ve a Google Hangouts video-calling habit – you won’t find Skype here, that’s for sure. The 0.9Mp webcam notches up a presentable 720p image, and as far as colour balance goes, it is surprisingly spot on. 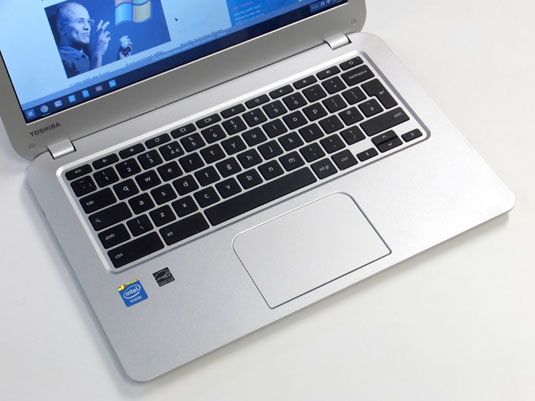 The keyboard is nicely spread out with a reasonably firm action

Firing up the Toshiba CB30 for the first time did produce a screen I’d not seen before, referring to a Managed Chromebook. Yes, corporate types can get in on the act too, and those signing in will have admin managed apps and services – presumably a bit like the Dell Wyse Cloud Connect Android-on-a-stick. If they’re lucky, these corporate Chromies might even be able to connect to a printer. Yes, Google Cloud Print is still as daft as ever and will send your documents to servers around the globe to finally churn out a page or two on the printer a few feet away from you.

This malarkey is probably enough to convince some to configure a dual-OS on their Chromebooks and thanks to Crouton, that’s a fairly straightforward task, once you’ve booted up in developer mode. Key commands allow a simple switch between Chrome OS and a Linux install that both run simultaneously (Crouton is a chroot-based system).

What that might do to the 4-cell Li-Po 52Whr/3380mAh battery life is another matter, but Toshiba claims it can last 8 hours 30 mins between charges, which seems about right from my experience, so long as you don’t have the display full blast. Admittedly, I've had it on full today and looking at the time remaining, I reckon that’s shaved at least 90 minutes off that duration figure. Even so, I reckon it should get you through the day.

And if your day involves productivity applications, then you’re not just stuck with Google Docs et al. Chrome OS runs through a list of alternative apps in its opening tour spiel when you first use a Chromebook. It even notes that Apple iWork users can access apps like Keynote through iCloud and also flags up the free Microsoft Office Online. I tried Microsoft Office 365, which worked perfectly on this Chromebook, complete with One Drive access. 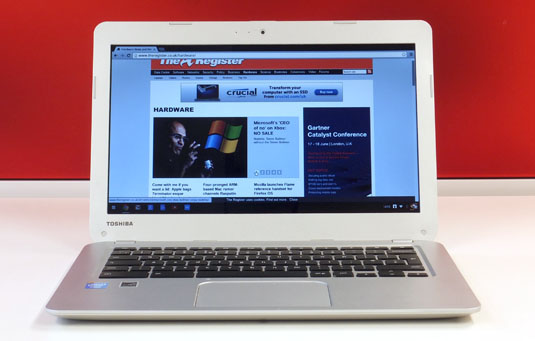 Not a conventional laptop replacement, but something in between

I’ve become much more comfortable with Chromebooks over the last six months, but that’s all due to a change in expectations and how I’ve since become accustomed to Chrome's modus operandi. On this point, I found myself treating the Toshiba CB30 much like a tablet. There’s the long battery life and the fact that when you open it up, it’s on in a trice.

Also, there’s the acceptance that you can only do so much with it, but for web browsing or knocking out some documents, it’s ideal. Indeed, having a keyboard is what makes the difference in deciding whether I reach for the tablet or the Chromebook.

All in all, Toshiba has put together a very respectable example of this breed, which works well if you don’t expect too much from it. With that in mind, the Chromebook needs to be seen as an alternative computing platform rather than a straight replacement for a conventional laptop. It may be some time yet before we see a glut of MacBooks, Vaios and Portégés on eBay. ®