Why would the advertising giant say the sky is falling?

“Inaccurate reporting” of Google’s fight against privacy rights in Europe last month risks misleading the public, says the Information Commissioner's Office – which safeguards those rights in the UK.

When a Spanish citizen demanded the removal of links in search results to news articles mentioning an old debt, Google claimed it wasn't subject to European regulations so it didn't have to do anything. The European Court of Justice (ECJ) disagreed, insisting the US web giant falls under the Continent's laws.

So, as so many have claimed, that's a new, out of the blue, "right to be forgotten"? No, a spokesman for the ICO told The Register.

“It’s not a ‘right to be forgotten’ – there is not an absolute right to have information removed,” the spokesman said, adding that “inaccurate reporting” on the ECJ ruling was regrettable.

“Irrespective of any newspaper article, the Data Protection Act regulates Google [in the UK],” he added, meaning there are already rules in place that Google must stick to.

Where the inaccuracies stem from

In May, the ECJ, the highest legal authority in Europe, threw out Google’s long battle to be exempt from Article 7, the “right to a private life”, of the EU Charter of Fundamental Rights. The company had brought the case against the Spanish data regulator and the citizen who wanted the research results removed.

Google had structured itself to evade European law, and had argued that it wasn’t processing information in Europe – and wasn’t even processing personal information. The court rejected these arguments.

Yet much of the reporting of that outcome perpetuates two inaccuracies. The first is that Google is now the ultimate arbiter of privacy complaints – and therefore faces a new and onerous additional workload. This is incorrect: each member state’s data protection regulator is the ultimate authority, so the workload falls on them. Google can reject all complaints at minimal expense, if it chooses to do so. It can also challenge any regulator's ruling.

The second falsehood is that the ECJ created a new, no-arguments "right to be forgotten" in the EU, which means any paedophile or bankrupt person can have information about their sexual convictions or financial affairs removed from Google’s search engine in Europe.

This is incorrect because the ECJ emphatically stated that removals could not jeopardise the public interest. And a pedophile's convictions are a matter of public interest.

As the ICO told us, the often-cited example of a former student who committed an indiscretion a decade ago, but who today finds it featured at the top of the Google’s search results, was what the ECJ had in mind.

“The case of the student is the perfect example of why we support the ECJ ruling,” the spokesman told us.

The deputy Information Commissioner explained the office’s view in a blog post on May 20.

However the sensationalist and inaccurate media coverage has encouraged a flood of complaints – which Google now appears to be exploiting in what looks like a calculated PR campaign. It looks a lot like a Son of SOPA: the advertising giant hopes to influence legislation by presenting it as a “crisis” for freedom of expression, and the entire internet.

Last week, Google assembled its own Supreme Court of hand-picked sympathetic outsiders, including Wikipedia supremo Jimmy Wales. After the ruling was announced, Wales incorrectly claimed the ECJ's decision affected journalists. He reacted by labelling criticism of his misunderstanding as "ad hominem" attacks on himself.

Alongside Wales, other advisors include Frank La Rue – a Guatemalan labour rights lawyer (oh yes) who was once a UN observer (or "rapporteur") – and a philosophy professor at the Google-funded Oxford Internet Institute. Their views are likely to align with Mountain View’s.

Professor Luciano Floridi duly told The Independent newspaper that the sky was falling.

The ruling had swung the balance of power towards the powerful and the censorious, the paper reported. Privacy and data protection laws would now need to be rewritten. 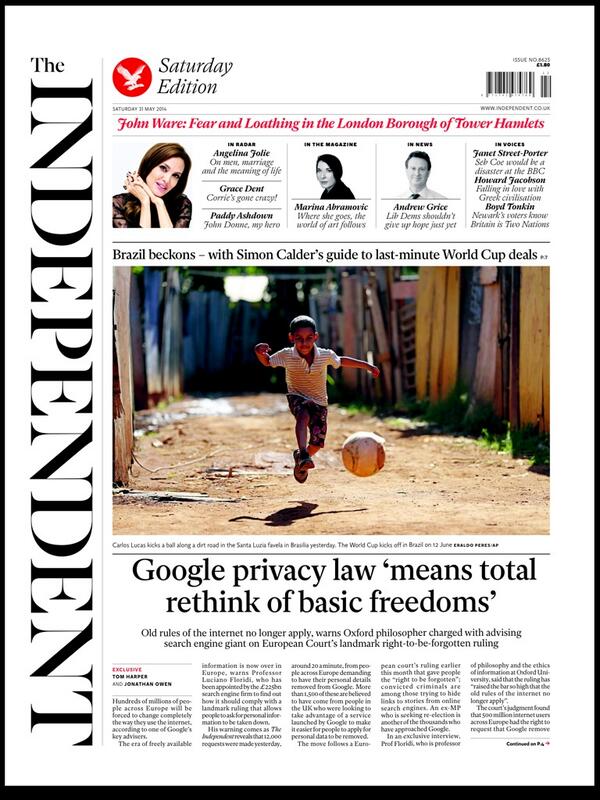 The professor told The Register last night that the Indie had over-emphasised his remarks. "The title doesn't exactly represent my thoughts. The idea that everything is now new is a bit too polarized," he said.

However, he did back changing data protection regulation, but declined to say how. We'll post our full interview with Professor Floridi shortly.

Next page: Not very appealing
Page: