'Outpouring of support' for Autoblow 2

NSFW The inventor of a "powerfully realistic electronic male pleasure machine" has hailed the “outpouring of support” for his robo-orifice after raising a whopping $250k down at Indiegogo.

With the backing of over 2,000 chaps, Brian Sloan has shot past his original $45,000 goal and is now poised to deliver worldwide relief via the Autoblow 2.

In a press release distributed by the appropriately-monikered "Brian S. Gross", which hit our inbox this morning in a plain brown envelope, Sloan described himself as "really humbled" by the ranks of desperate wankers who've queued up to administer a money shot.

He said: "Our whole team is super happy to know that soon, tens of thousands of men will having more realistic masturbatory experiences."

To deliver hitherto unimagined levels of orgasmic delight, the Autoblow 2 offers mains operation, three sleeve sizes, a "relatively hands-free" experience, and an industrial-strength motor "rated to last over 500 hours, or about 1500 solo experiences". 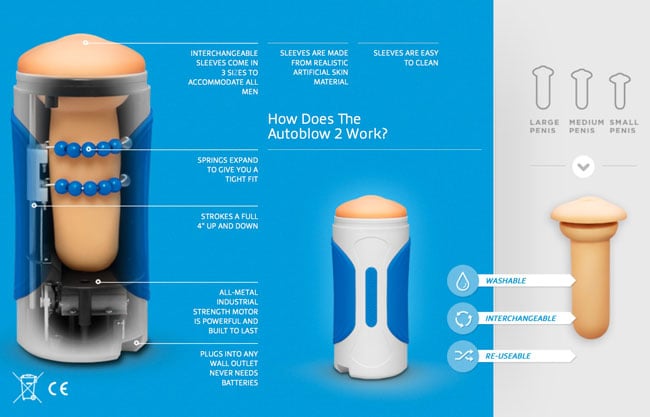 The Autoblow 2: Coming soon over a penis near you

There are still a few days left to run on the fundraising campaign, and for $2,999, you too can attend the forthcoming "official Autoblow 2 commercial shoot – featuring adult stars in both NSFW and SFW promo footage".

Speaking of NSFW, Sloan had a bit of a run-in with Indiegogo over his original promo vid. He explained: "Indiegogo asked us to remove certain parts from our pitch video found offensive by some users. I deeply apologize to those who were offended by the sight of artificial human penises." ®

Column Empty your inboxes, people, we can duck this problem together
Bootnotes22 Dec 2021 | 77

In brief Plus: Explore the limits of language models in bizarre research experiment, and more
AI + ML23 Oct 2021 | 47

And it was poorly secured, allowing someone to analyze players' private fantasies
AI + ML30 Apr 2021 | 36

Guy who wrote women are 'soft, weak, cosseted, naive' lasted about a month at Apple until internal revolt

Updated Ad tech engineer out after autobiography sparks protest – and what does this say about iGiant's hiring process?
Personal Tech13 May 2021 | 161

Dept of If I'd Known 20 Years Ago: Call centres, roosting chickens, and Bitcoin

Something for the Weekend, Sir? Getting it half-right means you got it half-wrong
Science12 Feb 2021 | 72