Opinion Is DevOps actually a thing, or just the latest funny way to case a word? At least there are vowels in it. We finally know the proper casing, but is it actually something normals are doing?

Right after the cloud horses left the barn some years ago, this mysterious notion of "DevOps" surfaced. DevOps started as a rallying cry around doing something with the combination of agile software development, lean manufacturing theory, and using new automation technologies like Puppet and Chef on top of cloud platforms.

The goal was to get "10+ releases a day". The famous Velocity 2009 presentation claimed this was not only possible, but common practice in their shop.

The idea of releasing code to production more frequently is certainly appealing, and who wouldn't want to do that in the age of constantly updating mobile apps? Since then, those one-per-cent elite West Coast kids have dug into DevOps like worms into a pile of fresh trash. Clearly, in the consumer space which sucks up most of the IT world oxygen, DevOps looks valuable, but what about for the rest of us in the normal, enterprise space?

Using job postings tracked by Indeed.com as a crude yard-stick, you can see a dramatic uptick in hiring interest: 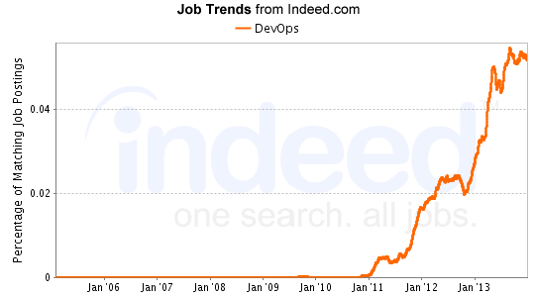 Beyond this kind of crude measure, us prognosticators at 451 Research wanted to dig into the mainstream DevOps market deeper. To that end, we just finished polishing up a survey of 200 DevOps and DevOps-minded individuals. This has given us a better sense of how immature the DevOps market is. Don't get me wrong, there's certainly interest, and the field has clear value, but a few of the chestnut theories of what DevOps is and how it's practiced are far from fully baked and deployed. Indeed, there's a lot of room for improvement.

Whether perfectly accurate or not, our premise was that the primary driver of doing DevOps would be to reduce cycle time: to get code into production sooner. On that point, the study participants seemed to agree, and the industry is doing much better than we'd have expected.

Why bother with this hassle, we asked? Mostly because of business demands – not just shiny object syndrome or some cruel coder callisthenics. 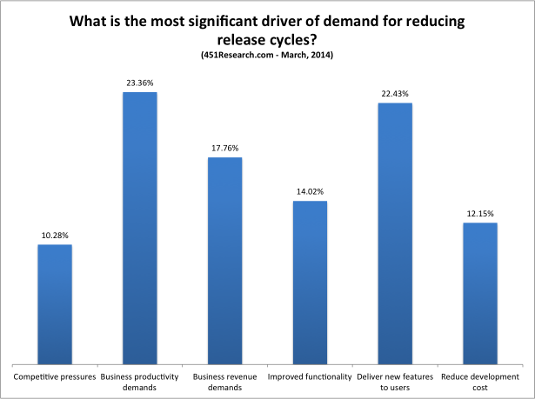 Our analysis of these results is that business demands rank first. Competitive pressure, business productivity demands and revenue demands total 51 per cent of responses. Product management demands – improving functionality and delivering new features to users – are a good secondary driver, indicating close attention to end-user needs. These are, of course, great goals for software to have: make money and delight users. Sign me up!

Next page: How's that duct tape holding up?
Page: