How's that duct tape holding up?

When you talk with DevOps cognoscenti, they like to pull out this giant hammer called "culture" that they promptly use to bash out your brains if you try to talk about actual tools. "Tools are not the issue, meet my hammer. I call it 'culture.'" They go on and on about culture, and process. It's delightful and necessary, I suppose, but it belies the sense that there's a "DevOps toolchain" out there: a common collection of tools and practices that teams use to get the job done. To that end, we strapped on our best Bascinet and asked about the tools used. Here's where things were less than utopic.

Spinning the vision dial way up, in the ideal DevOps toolchain it feels like you'd see at least two things.

First, consistent use of modern model-driven automation tools like Puppet, Chef, Ansible, and Salt throughout development, QA, and production to model, deploy, and manage the application. You do this to reduce the amount of changes and manual work needed between each stage as part of the process of reducing the "wall of confusion" between development and operations. But when we asked our study participants what they used, home-grown processes and golden image generation handily won: 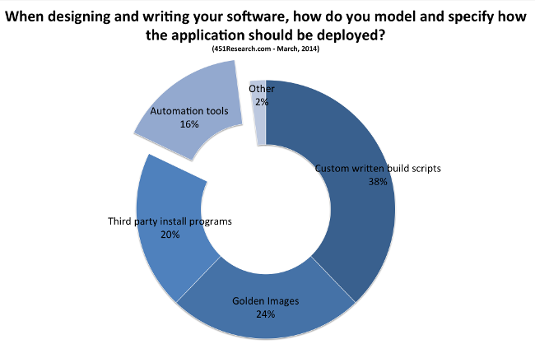 It's rare to come across a "build and installer team" that doesn't protect their growling, home-grown ball of duct-taped cats like it was their own child, we know. But: really, that's probably not something you should be doing on your own. Snowflakes, unique and special as they are, tend to melt when the heat is turned up.

Second on the vision-questing, you'd expect DevOps teams to be using some sort of continuous integration tool, a Jenkins-type system, if not Jenkins itself. Here, things are bit more cheery, but that ball of cats pokes up as the winner again: 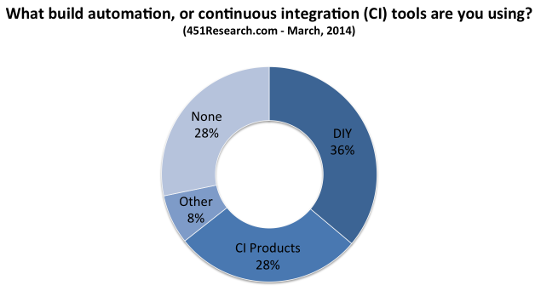 That 28 per cent of respondents who aren't doing any sort of CI is the most shocking. Surely things would improve for that lot with a bit of CI.

One can be cynical at this point (hello, dear readers!) on all of this and write DevOps off as sheer fantasy. On the other hand, after poring over our study and injecting it with a healthy dose of our anecdotal “evidence,” it's more accurate to say that DevOps, as a mainstream concern, is very early. There's clearly a desire there, but getting everyone on the same page, toolchain wise, is far off.

As in software development, the good news is that people are willing to pay for these tools. In the case of model-driven automation and CI tools, well over half of respondents said they were willing to consider putting their hand in their pockets, if they didn't already.

Free is nice, of course, but DevOps as a movement won't fund itself: untangling those build and deployment wizards from all those duct-taped cats isn't going to be easy. ®

Half of developers still at screens even during breaks

Strap in, we're on a tour from zero trust to chatty digital assistants
Applications26 Apr 2022 | 2