A new composite image from the Hubble Space Telescope has revealed the universe's "grade-school children" – star-forming galaxies 5 to 10 billion light years away. 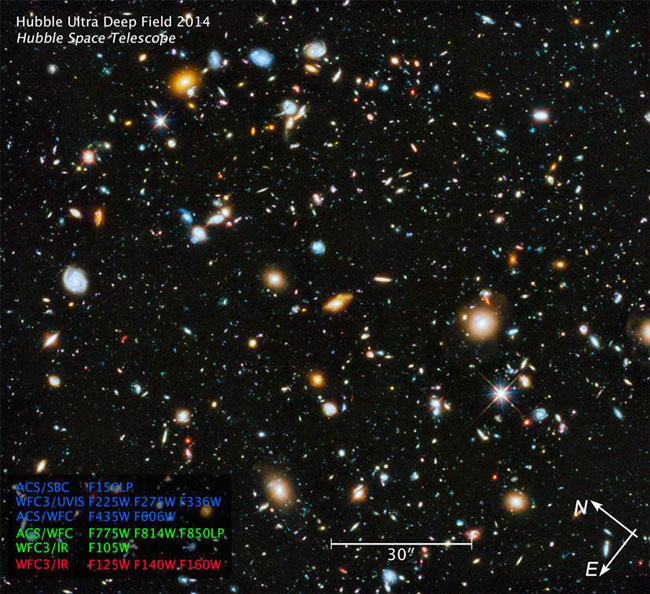 The Hubble Ultra Deep Field 2014 is made up of images of an area of space within the constellation Fornax, snapped between 2003 and 2009 by the space 'scope's Advanced Camera for Surveys and Wide Field Camera 3.

It provides the "missing link in star formation" by including ultraviolet data for the first time.

Previous surveys in the near-infrared provided an insight into star formation in nearby galaxies, and also "in the most distant galaxies, which appear to us in their most primitive stages due to the significant amount of time required for the light of distant stars to travel into a visible range".

However, what was happening in the "intermediate" galaxies remained obscure. By throwing Ultra Deep Field ultraviolet from "the hottest, largest and youngest stars" into the mix, boffins can examine understand how these structures "grew in size by forming small collections of very hot stars".

Dr Rogier Windhorst of Arizona State University said: "Ultraviolet surveys like this one using the unique capability of Hubble are incredibly important in planning for NASA's James Webb Space Telescope.

"Hubble provides an invaluable ultraviolet light dataset that researchers will need to combine with infrared data from Webb. This is the first really deep ultraviolet image to show the power of that combination." ®