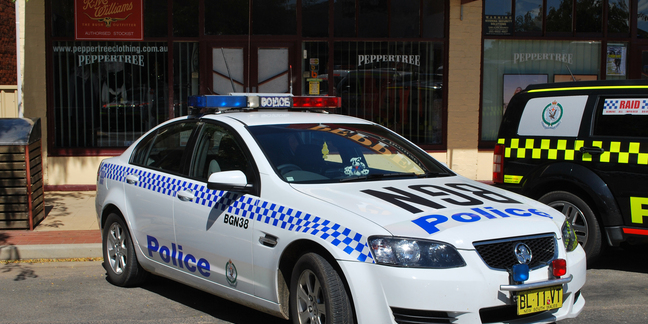 An unknown online crim drew 16 armed police to raid a Sydney man's home, by way of a fake emergency call to Queensland police.

The dangerous and expensive prank, known as swatting, was believed to be Australia's first on the public record, according to senior cybercrime state and federal police speaking to Vulture South.

Arncliff resident Matt McGrath, 18, was targeted by unknown assailants believed to have sent a spoofed text message to Queensland Police claiming he had killed his mother and held his father hostage.

"It's not only frustrating but it's dangerous, it's dangerous to the police responding to the people inside the house," Donohue told reporters.

"It will probably take weeks to months before we can find out through IP, servers and back-tracking the electronic footprint."

Donohue said he feared swatting may be glorified resulting in copycat attacks.

Swatting was an extremely dangerous and costly practise common in cybercrime and video game circles where perpetrators maintain anonymity by phoning in threats via number spoofing websites or official emergency phone relay services for the disabled.

Allegations of swatting in Australia exist, but none have been confirmed. It's a big problem in the United States where the FBI handles more than 400 cases a year.

A recent crackdown saw a Canadian arrested for running a swatting-for-hire business where police were called to scores of schools across North America.

In April, a frustrated US gamer sent police officers and helicopters to rival player's home after being defeated in the popular Call of Duty shooter.

McGrath had maintained an active presence on greyhat website HackForums but it is unclear if the attacker also used the site.

Claims in a post today by McGrath that the FBI was involved were quashed by Kogarah Police. The US agency did not confirm whether an independent investigation was underway by the time of publication.

McGrath said he did not know who attacked him or why, and claimed police accused him of phoning in the swat himself.

"Don't know who did it or why? I'm friendly to everyone.. even worse Australian police think I called them on my own," he wrote in a post.

"Why would I call the swat on myself?"

McGrath appears to have maintained a clean online presence, dabbling only in legal small-scale money-making operations.

HackForums users chimed in to support McGrath, stating he was a nice guy, dubbing the swatter a "real a**hole".

"I hope the person who did this to matt gets caught," one user wrote. "Matt did not deserve this at all."

Public mischief such as swatting carried a maximum penalty of a year in prison and a fine of $5500.

Perhaps the most infamous swatter was Matthew Weigman, a legally blind hacker who was serving an 11-year sentence issued in June 2009. He made some 60 swatting calls prior to his indictment and had harassed Verizon employees and investigators who were building evidence against him. ®

Roundup Including another, larger GPT-2 reveal