Chipzilla rep: 'Someone's gotta be the truth squad around here'

Last month, The Reg published test results performed by ARM that the UK chip designers said show that mobile processors based on its technology have significant advantages over Intel's chips when running Android apps. Intel would beg to differ.

Specifically, ARM senior technical marketing engineer Rod Watt had said at his company's 2014 Tech Day in Austin, Texas, that if apps haven't been recompiled to run natively on Intel-based Android devices and therefore have to be converted at runtime from native ARM code into native Intel x86 code using "binary translation" (aka "bridge technology"), the conversion caused "a huge impact to the user and to the performance of the system."

What's more, Watt said that in July 2013, 6 per cent of those apps simply didn't work at all on x86-based Android devices, and that by January 2014, that number had risen to 9 per cent.

"We look at some of this stuff," Calder told us, "and went, 'Okay, well, that might be true, or that might be twisted, this one's way off, that's way off'." So Calder hooked us up with Intel Principal Engineer Dan Lavery of Chipzilla's Software and Services Group to get Intel's take on ARM's numbers.

"We don't think that ARM's presentation is a reflection of [Intel Architecture (IA)] device compatibility and performance – an accurate reflection," Lavery politely countered.

Regarding Watt's January 2014 compatibility numbers, Lavery took issue with the assertion that only 91 per cent of apps will run on a Samsung Galaxy Tab 3 10.1 with a dual-core Intel Atom Z2560 – that 91 per cent being the total of 44 per cent translated, 23 per cent x86-native, 21 per cent running in the Dalvik virtual machine, and 3 per cent unknown.

"On all the devices that we've tested recently, both ARM and IA, including the Galaxy Tab 3," Lavery said, "we're getting a pass rate between 97 and 99 per cent." 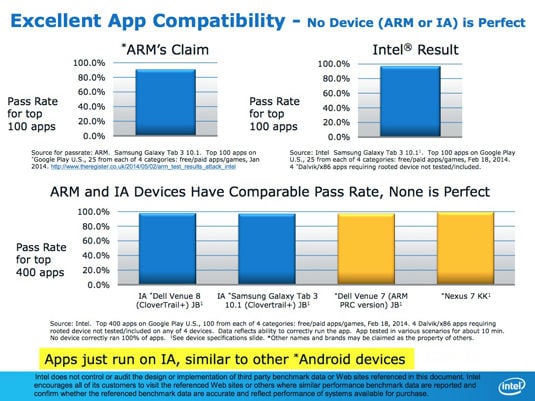 Nobody's perfect, but Intel says it's perfecter than ARM wants you to believe (click to enlarge)

Lavery also tested four devices, based on a much larger set of apps from a marginally different time period: the top 400 apps on Google Play this February, 100 each from free and paid apps and games. Of the devices tested, two were IA-based and two were ARM – and although the Google Nexus 7 powered by a Qualcomm Snapdragon S4 Pro with a quad-core ARM-based Krait CPU was the most compatible, the differences among the four were minimal.

"Even some of the ARM stuff is not perfect," Calder pointed out.

Lavery agreed with ARM's Watt that a "large percentage" of apps in Google Play only have an ARM-native version. "This is true," he said, "but almost all these apps run with good user experiences on Intel devices."

When pressed to define what he meant by good user experiences – which he upgraded to "great" when asked – Lavery discusses his testing of 21 games to determine the frames-per-second effect of the overhead of binary translation – what Intel calls bridge technology – by comparing the performance of translated ARM-native games with that of a native-x86 version of the same game. 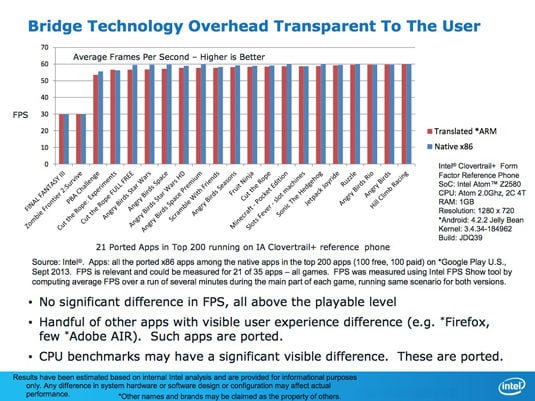 "The overhead here is really not visible to the user for the vast majority of apps out there," Lavery said. "We're not saying we're perfect here – there are a handful of apps that do have a user-visible difference." Among the top 2,000 apps, he said, there are a few – "literally a handful" – of Adobe AIR–based apps that do have a visible difference, but these will also soon be able to be ported, seeing as how Adobe has announced support for AIR on x86 for Android "due to developer demand."

"Just for full disclosure," he said, "some of the CPU benchmarks do have significant visible difference, but of course benchmarks are ported as well."

Lavery also took issue with ARM's claims that binary translation has a heavy impact upon energy consumption. "We actually think that – not think that, but know that – the effect of the bridge technology on battery life is negligible," he said.

As proof of this assertion, he shared the results of his power-consumption tests of 35 apps in the Google Play top 200 for which he had both ARM-native and x86-native versions. 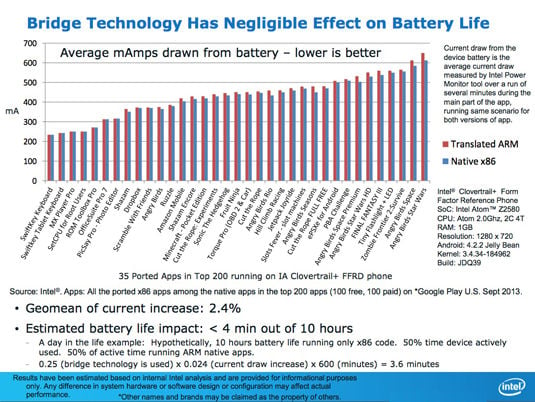 Intel's Calder: 'Negligible is an important word' in the message of these battery-life results (click to enlarge)

According to Lavery, the geometric mean of the increase in current required for binary translation of the apps he tested, measured in milliamps, was 2.4 per cent. In a hypothetical 10-hour battery life usage scenario during which a device was used half the time, with half of that usage running ARM-native and half running x86-native apps, the impact on battery life would be about 3.6 minutes.

As Calder put it, ARM was right about binary translation requiring more power – but not much. "We agree – but guess what? It's like less than four minutes out of 10 hours."

Although there are still a goodly number of apps in Google Play that have yet to be ported into x86-native versions, Intel's goal is to get that number up to 80 per cent – although neither Calder nor Lavery could provide a timeline for that effort.

Their argument is that the fact that many apps have yet to be ported to x86 is a non-issue. "All the IA devices can run [ARM-native apps] well," said Calder.

"You can always make a corner case for this particular app or that particular app," he argued, "but if the vast majority of apps that are in the store work well, does it matter?"

Does it matter to you, dear Reg reader? And, for that matter, which company does your experience lead you to believe, ARM or Intel? Let us know in Comments. ®