So the first commercial releases were snapped up amongst increasing hype, with Tetris marketed as something unique from that mysterious culture beyond the Iron Curtain. All 1980s computers were covered, including Amstrad CPC and PCW, BBC, Amiga, Atari ST and Spectrum. 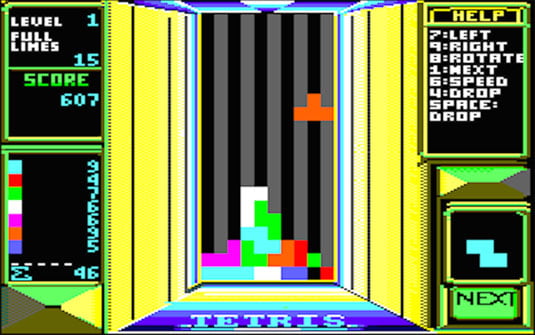 A Commodore 64 version featured a remarkable 25-minute long soundtrack, and the Acorn Electron effort contained the dubious claim that the game had been banned in Russia for being so addictive!

With no legitimate licence in place, these titles could easily have ended up withdrawn from the shelves. Happily that never happened – although threatening faxes were initially sent – and a new licensing agreement to cover the releases was agreed in Moscow shortly afterwards. Importantly though, Stein was also wrong-footed by the Russians into signing for home computer rights only, excluding consoles and handhelds.

He left Moscow believing he had all rights sewn up, which would certainly prove problematic: Atari games, relying on the strength of Stein’s newly signed contract, were soon to publish a version under their Tengen label for the 8-bit Nintendo Entertainment System. 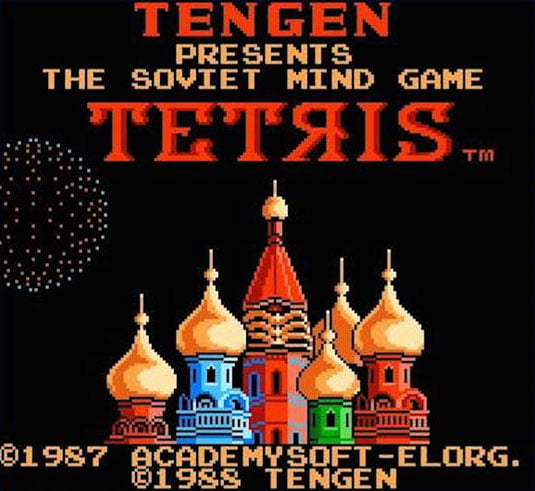 An opportunity had been left open for Henk Rogers, a Dutch-born entrepreneur, to fly into Moscow and clear up what was left on the table. Striking up a friendship with Pajitnov certainly helped his case, and console rights were successfully signed to his company, Bulletproof Software, which then worked closely with Nintendo to produce versions for the NES and Gameboy.

Thus, this convoluted journey would culminate in Atari and Nintendo facing each other down in court over who had the right to publish the game. Unfortunately for Atari, it lost, and after only four weeks on the shelves, all remaining copies of the Tengen cartridge were recalled, with a hundred thousand already sold.

In this case, the gamers lost out too: Tengen’s version is generally considered to be the better release, since it allowed for side-by-side 2-player action. You’ll find collectable copies going for good money to this day.

Perhaps the biggest coup for Henk Rogers and Bullet Proof Software was to establish Tetris as the bundled title for Nintendo’s Gameboy handheld in America and Europe, but it might not have worked out that way.

The latest Mario platformer had, predictably, been pencilled in for inclusion in the Gameboy package, but Rogers convinced Nintendo of America’s CEO Minoru Arakawa to think differently. That the Gameboy went on to be the most successful selling handheld console of all time is no doubt testament to the universal appeal and addictiveness of Tetris.

Next page: From Russia with lawsuit
Page: