From Russia with lawsuit

With well-crafted music that became synonymous with the title, and a distinctly memorable sound effect when scoring "a tetris" (like a deranged sheep?), the Gameboy version is definitely a bona-fide piece of gaming heritage.

Scores of demo Gameboys in shops across the UK were plagued by kids trying to grab a quick four-block fix. Parents neglected housework, television, and each other, to steal their children’s Gameboys for the first time ever.

Whichever version of Tetris you played – legal or otherwise – it was clear that the sublimely simple game mechanics would make it a classic. Is there really a machine out there that hasn’t been blessed with the Tetris in some form?

It’s so ubiquitous, even oscilloscopes have hidden versions tucked in there as Easter eggs. And thank the Lord for the genius of the Tetris watch I had back in high-school – it alone got me through many mind-numbing assembly moments.

In subsequent years, Pajitnov attempted follo- ups with titles like Welltris, Faces, Hatris and WordTris. Generally well received, they’re still absolute non-entities when compared to the original’s prevalence. Hundreds of semi-sequels and remakes of the original game also cashed in on its timeless appeal.

In 1996, Pajitnov founded The Tetris Company in conjunction with Henk Rogers to keep an eye on the myriad rip-offs that crop up, particularly on mobile platforms. Normally, the Tetris Company will apply for copyright-infringing titles to be taken down from the App Store, or send cease-and-desist letters to developers. It’s not without controversy: in 2011 Tetrada for Windows Phone was taken down, though its developer Mario Karagiannis claimed a lack of resources to fight the "bullying". 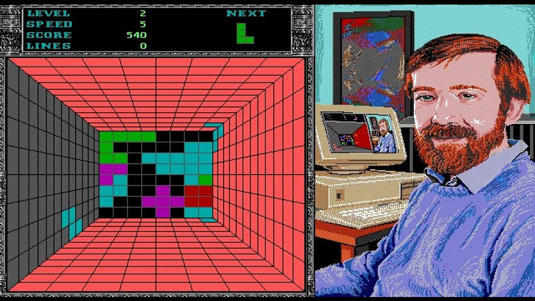 Welltris, the first official sequel, was never going to appeal in quite the same way

Of course, explaining to El Reg readers how to play Tetris is like challenging bar-room brawlers to drink liquor and get nasty. Yet defining the game in terms of its copyright value is a trickier task – here’s the wording created by judge Freda Wolfson in the 2009-2013 Tetris versus Mino court case:

“Tetris is a puzzle game where a user manipulates pieces composed of square blocks, each made into a different geometric shape, that fall from the top of the game board to the bottom where the pieces accumulate. The user is given a new piece after the current one reaches the bottom of the available game space. While a piece is falling, the user rotates it in order to fit it in with the accumulated pieces.

The object of the puzzle is to fill all spaces along a horizontal line. If that is accomplished, the line is erased, points are earned, and more of the game board is available for play. But if the pieces accumulate and reach the top of the screen, then the game is over.”

In this case, Xio Interactive’s title, Mino, had enjoyed significant success and revenue, and furthermore Xio were not about to back down, believing there was no valid legal case to be made. The Tetris Company chose to argue their point through legal proceedings – and won.

Next page: Stacked in favour
Page: