Apple says it will tweak the networking stack in its forthcoming iOS 8 smartphone OS that'll put an additional stumbling block in front of advertisers, marketers, and other snoops looking to collect information about you from your mobile devices.

The iPhone maker announced the change during its annual Worldwide Developers Conference (WWDC) in Cupertino last week, details of which are only just now making their way out to non-attendees.

Beginning with the next version of iOS, Apple gadgets will scan for Wi-Fi networks using randomized, software-defined MAC addresses, rather than the hardware addresses they were assigned at the factory, according to a slide deck [PDF] from one session.

That's an important change, because although it should be obvious that when you connect to a Wi-Fi network the owner of that network can use various means to track and monitor your behavior, it's less widely known that it's possible for Wi-Fi networks that you don't join to track you, too. 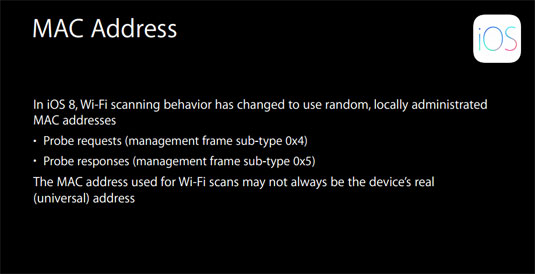 That's because when your device scans for nearby Wi-Fi networks, it sends out its MAC address as a way of asking for useful information about each network, such as the data rates that it supports.

Because those addresses are unique to each device, if a certain Wi-Fi router is configured to log all of the MAC addresses of all of the nearby devices that send out requests, a snoop could potentially know each time you visit a certain business, for example, or you walk down a particular hallway.

Such spying methods were most famously demonstrated in an incident last year in which a company called Renew London planted Wi-Fi enabled rubbish bins around London's financial district that managed to log more than 500,000 unique devices in a single week, many of which were spotted multiple times. Naturally, the bins also had LCD screens for displaying ads.

The high-tech trashcans were eventually given the boot by the City, despite Renew London's protests of innocence, but only after the project was brought to the attention of the public by the press.

But the MAC address–gathering trick would be foiled by iOS 8's new behavior, however, in which iThings scan for Wi-Fi networks using "random, locally administrated MAC addresses" that "may not always be the device's real (universal) address."

If you do choose to join a given network, of course, you'll be sharing your real MAC address, as usual.

While this is the first time The Reg has heard of a mobile OS exhibiting this MAC-scrambling behavior, however, we should point out that Apple isn't altogether innocent, either. It may be that Apple just wants developers to code for its own, Bluetooth-based iBeacon tech, which is already being used to track customers in some Apple and Macy's stores.

Apple is expected to roll out the final version of iOS 8 this fall, possibly along with a new iOS device, but also as a free update for more recent iPhone, iPad, and iPad mini models. ®