For 14 years, The Register has been chronicling the publicity stunts of Kevin Warwick, an attention-seeking academic with a sideline in self-mutilation*. In fact, Warwick has been making improbable claims to the press for much longer than that: over twenty years. But the world has continued to relay Warwick's stunts and soundbytes unskeptically.

Until now, that is.

This week, the realisation may have belatedly dawned on much of the mainstream media that a Kevin Warwick claim needs to be taken with a mine's worth of salt. The "science" proves (or disproves) very little, and his predictions are frequently a load of cock. Former BBC science man David Whitehouse reminded everyone via Twitter this week that as far back as 1991, Warwick was predicting "real life Terminators" within ten years.

What did it this time is Warwick's claim that the "Turing Test" - which measures ability of a machine to convincingly mimic a human while communicating with real humans in a blind test - had been passed at an event Warwick had organised and hosted. This had all the hallmarks of a Warwick stunt - you only had to look.

Warwick told the media that the landmark had been achieved using a "supercomputer" - when it fact it was a simple AI chatbot program running on a laptop. The chatbot's developer had tried and failed many times to convince humans it was human. This time, the academic luminaries chosen to judge the Test included a retired advertising being with no scientific background (now a Lib Dem peer) and, um … the TV actor and former shoemaker Robert Llewellyn, whose cybernetics qualifications consist of having played the neurotic robot Kryten in Red Dwarf.

Only a third of the judges were actually persuaded that the chatbot was a 13-year old Ukrainian speaking English as a second language. Again, as Dr Whitehouse points out, it isn't hard to imitate a 13-year old. 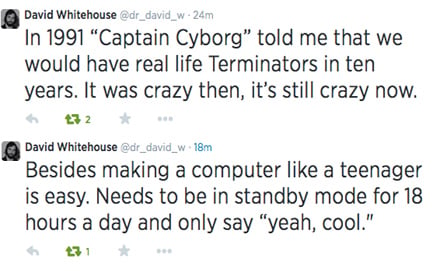 Warwick's latest stunt is a vivid example of Jaron Lanier's observation that to be impressed by computer AI, we first have to make ourselves pretty stupid.

"You can't tell if a machine has gotten smarter or if you've just lowered your own standards of intelligence to such a degree that the machine seems smart," wrote Lanier in You Are Not A Gadget. "People degrade themselves in order to make machines seem smart all the time."

[Or we might paraphrase the cruel but popular description of Stephen Fry and say that what we have here is a stupid person's idea of an intelligent machine - Ed].

At first the reporting was uncritical. Gosh, wow – and how about that – wrote the Guardian. And the Daily Mail. And the BBC.

"Are we all doomed now?" the Graun mused.

Today everyone has sobered up. Rollo, a chatbot creation of the fantastically misanthropic and rather evasive AI software developer Rollo Carpenter (I talked to him here) had previously achieved a 59.3 per cent kiddology score, as New Scientist points out. The Guardian has performed a reverse ferret.

And now we can see the transcripts, we can see how low the judges dumbed themselves down. Asked by the bot 'Eugene' where the judge lived, this exchange followed:

For years, Warwick's Wikipedia entry was the subject of furious edit wars, with many amendments made from a computer at Reading University, where Warwick lectures.

Which has all rather put Kevin Warwick under the microscope.

How has Warwick contrived to gather so much publicity? Well, he stays away just long enough for people to forget who he is. For years, his Wikipedia entry listed the skeptical reaction that greeted his publicity stunts - and his popular nickname, Captain Cyborg, conferred upon him by this very publication. (Edits hyping his own claims could be sourced to his own University). Now it's almost completely scrubbed clean, again.

Most journalists and researchers don't get further than the top paragraph of a Wikipedia entry. But perhaps most of all, editors and producers desperately want to believe his claims are plausible. ®

* He installed a chip in his arm, for instance, and claimed that he had become the advanced guard of the Terminators thereby.