HP starts a memristor-based space program to launch ... THE MACHINE

HP may have found a way to save itself from oblivion, but apparently the only way to be sure is to throw three quarters of its research team at an ambitious new product suite based on a much-hyped yet troublesome technology.

The beleaguered IT giant plans to rejuvenate itself with a set of advanced technologies that, when combined, make a device called "The Machine" that can be as small as a smartphone and as large as a 160-rack supercomputer, the company announced at its HP Discover event in Las Vegas on Wednesday.

This family of products will make use of HP's massively delayed "memristor" memory substrate, along with silicon photonics, a custom operating system, and customized chips, HP said.

If the plan works, HP may defeat the rot in its printing and computer divisions that is currently weighing it down. If it doesn't work, though, HP could become another Sun Microsystems, a company that birthed some incredible inventions but never quite figured out how to make money from them.

"HP is building a new way to compute from the ground up," said chief executive Meg Whitman in a keynote speech at HP Discover on Wednesday. "We've been talking about many of the component technologies for some time. Now we're bringing them together in a single project to make a new computer architecture available by the end of the decade." 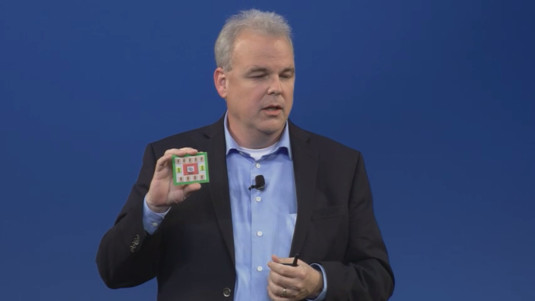 The Machine depends on many technologies, but the most fundamental one is the memristor – an HP project that at first looked like a golden goose and quickly became an albatross.

The memristor is a resistor that stores information even after losing power. It is the fourth circuit element after the capacitor, resistor, and inductor. In other words, it offers the potential for incredibly fast storage at a minimal power cost, and is therefore a desirable tech for any digital product that needs to store information.

Translation: whoever figures out how to get good yields on the mass manufacture of the memristor – or another next-generation memory technology, such as phase-change or spin-transfer torque – stands to make an ungodly amount of money.

HP figured out the theoretical basis for tech in the early 2000s, then successfully manufactured a prototype in HP Labs in 2008, which it sent it off to mass manufacture through a partnership with Hynix in 2010.

But that was when the memristor dream started going awry. In 2011, HP promised it would launch "a replacement for flash in the summer of 2013," but by the time 2012 rolled around, HP announced a further delay, saying it wouldn't be available until 2014.

Hopes of memristor-loving boffins the world over were truly dashed in 2013 when HP CTO Martin Fink said HP would start churning out 100TB memristor storage drives ... in 2018. This stuff, as miraculous as seems, is devilishly hard to manufacture.

Now HP says the tech could come along in DIMM form by 2016, according to a slide shown at the conference, and that it will appear by the end of the decade in a new device: The Machine. 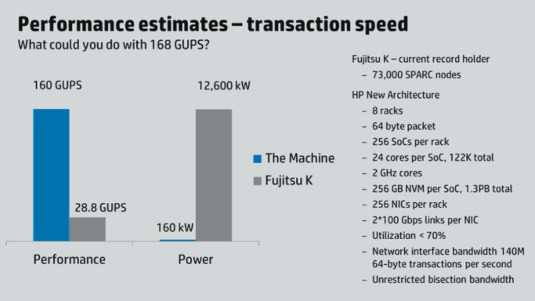 HP believes the memristor could be a fundamental element of ultra-fast, ultra low-power supercomputers

HP's memristors lets it "flip between zero and one on the picosecond range," explained chief technology officer Martin Fink in a keynote speech at Discover. The tech promises "a tremendous increase in density [and a] tremendous reduction in power."

The memristor will be a key component of the "universal memory" of The Machine, Fink said, before giving some more detail on this strategically important tech.

On stage, he showed a prototype 3D memory cube made of memristors, linked to a processor by some photonic fibre that, he said, should be capable of 6 terabytes per second of data transfer.

"The other thing that we're doing is we're going to connect that to a large, single pool of what we call universal memory. Then we're going to connect those two with a very high-speed, low-latency fabric based upon photonics. This will enable us to deal with massive, massive datasets [and] not just be able to take those massive datasets, but ingest them, store them, and manipulate them, and do this at orders of magnitude less energy per bits, per compute."

Fink said that the combination of photonics and memristors could mean that The Machine can scale to 160 petabyte racks, where any single byte within that whopping 160PB cluster can be addressed in under 250 nanoseconds.

When the tech is scaled down, Fink said, the memristor will make it possible to build a smartphone with 100TB of memory.

Besides the hardware development, HP said it is currently designing an Android distribution optimized for this new class of non-volatile memory, as well as The Machine OS, a new, open source operating system built to deal with the peculiar properties of the memristor.

"We want to reignite in all of our universities around the world operating system research, which we think has been dormant and stagnant for decades," he said. 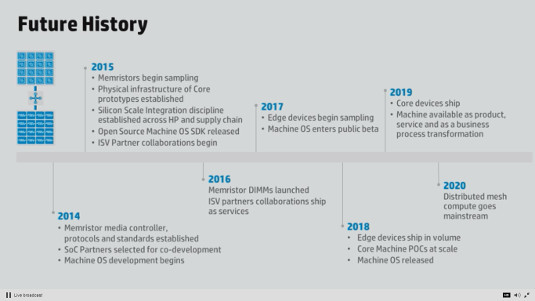 HP's The Machine is more like a space program than a single item, with technologies due to trickle out over the coming decade

So far, The Machine seems like less of a product and more of a space program, the components of which will all be developed and sold independently but may one day make the computer-equivalent of a space station – a powerful, novel device that is much, much more than the sum of its parts. According to BusinessWeek, 75 per cent of the brains in HP Labs are dedicated to the project.

But although much of HP's marketing around The Machine talks of the tech problems it will solve, there's another thing lurking in the background: HP is a company built on high-margin revenues from custom hardware, yet the rise of white-box gear and cloud providers has wrecked that. For HP to survive, it needs a high-margin hardware business, and the memristor could be the key to that.

Meg Whitman described the tech as "a catalyst for a revolution" and Fink said "HP is leading the industry once again." But at this stage, while HP is hypothetically leading the industry, given ongoing neuromorphic processor research schemes at IBM and advanced interconnect research at Fujitsu, The Machine may soon have some competition.

We wish all of the boffins well in their quest to bring such exciting technologies into reality. ®