Steelie Neelie 'outraged' as our man reports from amid cross charioteers

Pics London’s black cabs went ahead with their protest against the Uber taxi-getter app today, bringing traffic around the centre of the city to a standstill (at times anyway). 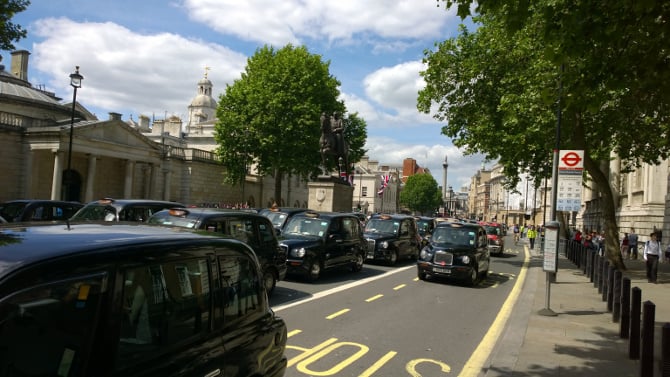 The cabs have parked up around Trafalgar Square in an organised protest against the mobile app, which allows users to book trips in licensed taxis and minicabs, using GPS and the app to calculate distance travelled and the fare for the journey.

The Licensed Taxi Drivers’ Association argues that the mobile app is basically just a form of taxi meter, which private cars and minicabs aren’t legally allowed to have. 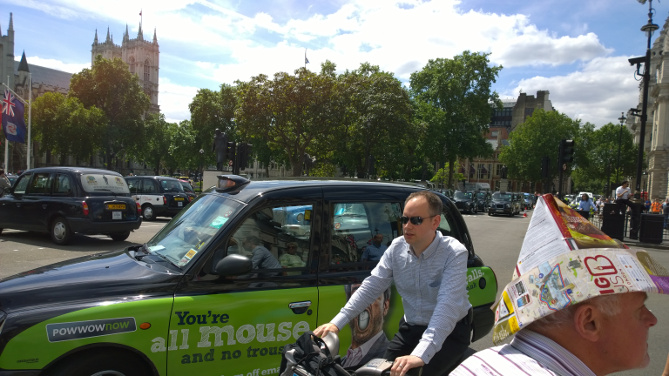 A guy in a paper hat at the protest. (No, we don't know why either but maybe the sun?) Credit: Andrew Orlowski

British cabbies aren’t the only ones with Uber issues – the app has been the subject of a number of legal and regulatory challenges in the US as well.

Traditional companies usually argue that apps like Uber allow illegal and unregulated taxi services and point to accidents and lack of accountability from private drivers to prove their point. Fans of the apps say that entrenched companies are simply refusing to move with the times and get with the technological future. 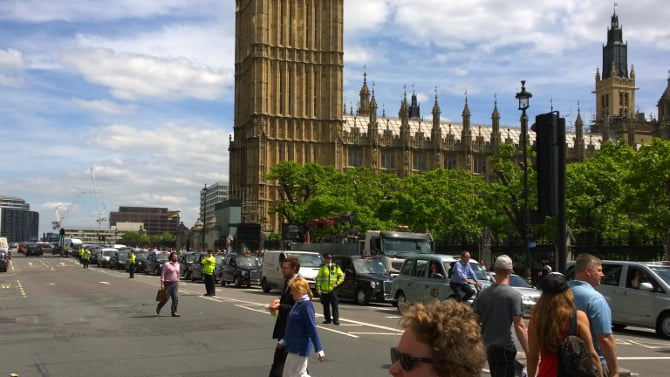 While the LTDA doesn’t like the technological future of Uber, it’s happy enough with Twitter, where it’s been pumping up the protesting drivers with inspirational tweets like these:

We would remind all taxi drivers you are licensed to ply 4 hire anywhere in the Metropolis. Weds afternoon 2pm it is very busy in Whitehall!

Do not give up, keep coming , we r winning, if diverted return by any route however circuitous ! United we stand! RT

Do not give up, keep coming , we r winning, if diverted return by any route however circuitous ! United we stand! RT

Hoot if you care! RT

Meanwhile, European digital czar Neelie Kroes weighed in on the debate with a blog post today that accused folks of having a problem with the “wider sharing economy”.

“Many people know how outraged I was by the reaction of authorities and drivers to the emergence of services like ‘Uber’ in Brussels, Berlin, Milan, Madrid and more cities across Europe,” she said, adding that if drivers thought price competition was bad now, wait until driverless cars come along. 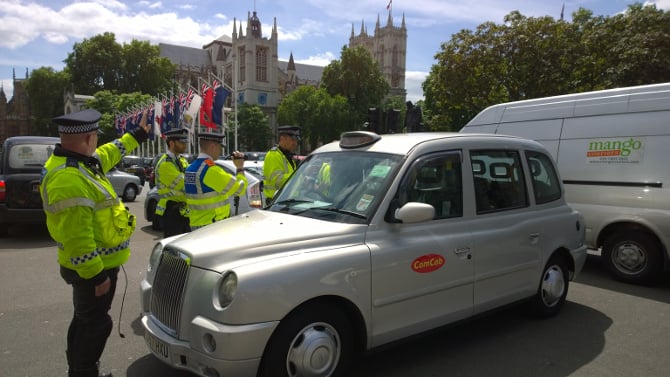 Police direct a cabbie at the Uber protest in London. Credit: Andrew Orlowski

Kroes said that while she had sympathy for drivers who were just trying to feed their families and were locked into expensive licensing systems, protests weren’t the answer.

“What we need is a real dialogue where we talk about these disruptions caused by technology.

“We need to see that even if the change requires adjustments, it also is a sign of much needed entrepreneurs, and it is a boost to all of us as consumers. And all of these perspectives need to be accommodated,” she said. ®

O Cannabis! Meanwhile, ride biz back to court in the UK over driver contracts
Bootnotes23 Nov 2021 | 17

What, Uber charges disabled people fees for taking a while to get into their ride? Doesn't seem fair, says Uncle Sam