McCormick's answer to this is a system based on digital image correlation. It involves taking lots of very large photos very quickly and using software he built to compare new and old images.

The cameras in NPL’s tunnel trolley take 12 shots per metre at 10/1000s of a second, with 24 megapixels per shot to deliver an image where one pixel covers one millimetre of tunnel, letting experts drill down to between a 10th and a 20th of a millimetre. Each image is 125 Gigapixels in size. A laser scanner on the front of the aluminium trolley measures the tunnel’s shape.

Images are aligned using software over the full field, with two images compared at the pixel and sub-pixel level using McCormick’s software. About 15,000 calculations are made per pixel in the software to compare pixels. For two tunnel scans that are 500 metres long that means about 10 trillion calculations. 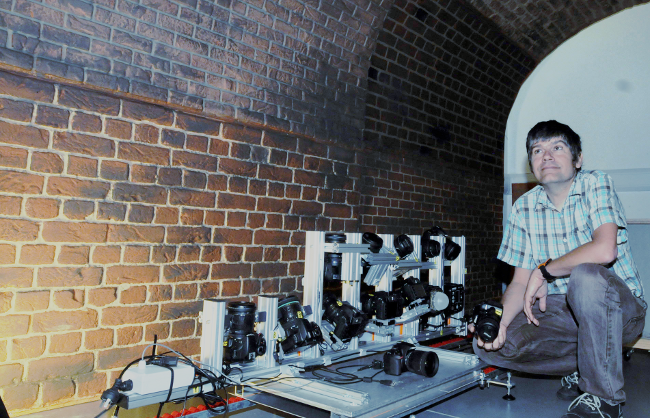 McCormick's program is written in Java and runs on his Mac Pro, using 20 simultaneous computational threads on two six-core processors. NPL’s man reckons the software uses some highly efficient algorithms to run quickly and consume just 24GB of RAM. But the boffin does have a second Mac Pro in his office, plus four Mac Minis at his disposal – meaning 38 cores are available for processing.

Testing the stress on structures is an idea the mega-lab has used before – on buildings, and even on food. NPL worked with one chocolate giant to test how far the brown stuff shrank in the moulds to ensure that it fell out properly during manufacture. This process involved sprinkling an aluminium power on the surface of hot chocolate and recording the changes as the bars shrank.

We leave here and journey next to the centre of time - a room where NPL keeps the physical and digital worlds running on time: the timescales laboratory.

Controversial NPL physicist Louis Essen created the world’s first functioning atomic clock in 1955 - the Caesium 1. Mk 1 and its successor, the CsF2, have helped create and maintain TAI (Temps atomique international, or International Atomic Time), which is used to calculate UTC. CSF2 is an atomic fountain, a cascade of caesium atoms. The second is measured using a process that takes place when the caesium atoms are exposed to the microwaves: spin flip. The caesium atoms are resonated using microwaves until they flip at a specific frequency – 9,192,631,770 Hz; a flip defines a second.

This process is a reliable constant, making TAI and UTC more accurate than solar time, which is based on the Earth's rotation. That rotation is slowing.

An atomic-based definition of the second is perfect for digital devices and computers that need constants to function reliably just to keep time or help work out their location. The CSF2 in NPL today is 300,000 times more precise than Mk1, which - translated - means it loses just one nanosecond every two months and it has been named the most accurate atomic timepiece on the planet. As such, CSF2 is one of just six atomic clocks considered reliable enough to ensure the accuracy of UTC.

As for CSF2, it looks like an aluminium alcohol still on stilts while the room CSF2 occupies feels like a broom cupboard - tiny and windowless and nearly silent except for the ticking of tiny mechanisms on a workbench which are constantly raising and lowering their little arms to control the flow of the lasers that are used by the clock. 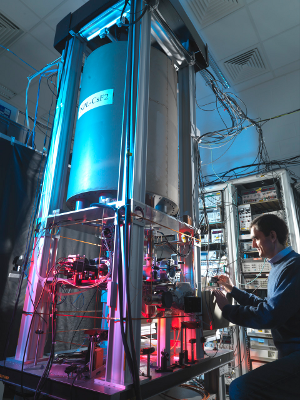 Upstairs from CSF2 is ground zero for time-keeping: the timescales laboratory. This is where the signals are prepared, sent outside NPL and monitored. It is from this room that UTC (NPL) – accurate to within 100 nano seconds (100 billionths of a second) – and the MSF Radio Time Signal are generated. The latter is the basis of the UK's civil time and is used to manage all manner of electronic devices but is best recognised as the pips heard on BBC radio. Rare outages, when they occur thanks to maintenance, are noteworthy.

For all this not inconsiderable importance, it's a tiny and rather unassuming room: white walls, gentle lighting and a server-rack-like metal frame in the middle of the floor.

In another world, it would hold server blades. But packed in this rack is the gear to monitor the MSF time signal, check the UTC signal generated by NPL and send it up to Cumbria. A recent addition is a dedicated fixed link to the City of London's financial traders so they can time-stamp trades.

Overall, there are seven atomic clocks and four hydrogen masers. In this room there is one maser, packed into a black unit that makes it look like sound system. A further three reside in a temperature-controlled lab downstairs. The one maser is the master clock for UK time with the others on back-up duties. As one final precaution, the maser is checked against CSF2. 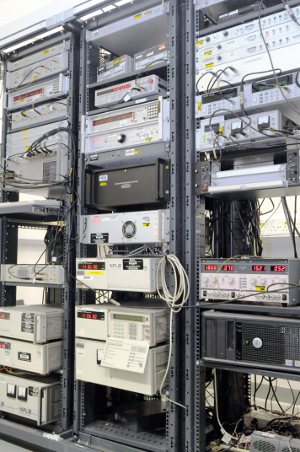 The timescales lab's array for monitoring

We leave the atomic-clock lab and enter another of those non-lab-looking labs. This reminds me of a Wickes’ warehouse: high ceiling, brick dust on the floor, brooms propped up in different corners.

Curiously, too, square panels of cemented brick walls have been bolted between blue metal frames and are lined up awaiting some experimentation.

Rising above this scene is the giant aluminium cube waiting to receive them – it’s contained by a round blue metal rig and controlled from a simple yellow box.

This is NPL’s Hot Box facility and the silver box dominating the room is one of NPL’s two "Guarded Hot Boxes". Hot boxes are used to measure transfer of energy as heat through various materials. The megalab has designed and built its own. This one is capable of rotating. With the addition of rotation, NPL can test this transfer, and thereby the energy efficiency of materials, in any orientation: inserted materials can be warm on top and cold underneath, vice versa, or a plain old left-to-right shift.

Next page: Thinking outside the static hot box
Page: