Nimble is as Nimble does: Mutant runs 'just like flash-only' gear

Nimble has boosted the performance of its hybrid flash and disk arrays with a CS700 model and all-flash expansion shelf.

Nimble’s arrays provide disk-based capacity with flash used as a cache to accelerate data access. It claims that it now “provides the performance of flash-only arrays and the capacity of hybrid arrays” because of this.

The flash is used as a cache and Nimble says it avoids over-provisioning flash through a so-called Adaptive Flash technology, which you can read a little about in a PDF here.

We're told Adaptive Flash is "redefining the storage market" - score 2 out of 10 for this piece of marketing fluff - and that it "allows the dynamic and intelligent allocation of storage resources to satisfy diverse and stringent application demands." There's little more actual detail in the PDF.

It has a maximum of 312.5TB of effective capacity (assuming 2x compression) just like the CS460. In fact the storage capacity numbers for the CS700 only differ from the previous top-end CS460 model in that the 3U head unit can have 3.2TB of flash instead of 2.4TB.

We have tabulated the basic Nimble Storage product configuration data and the table shows this clearly. 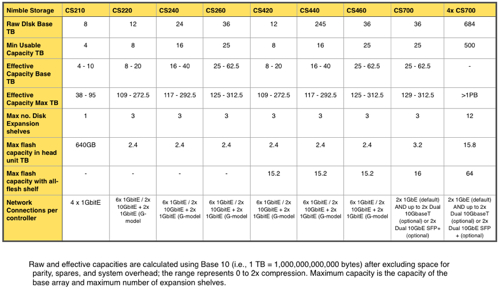 If the small print hurts your eyes click the table to enlarge it.

Brian Troudy, IT manager for Corona Norco Unified School District had a quote in Nemble’s release document: “We pushed the Nimble CS700 array as hard as we possibly could, and we consistently achieved north of 125,000 IOPS with under 0.1ms latency across SQL workloads.”

Four CS700s in a cluster provide some 500,000 IOPS and 64TB of flash, not as much as Tegile’s single T3400. The maximum effective capacity of a 4-node CS700 cluster, assuming 2x compression and excluding space for parity, spares and system overhead, passes a petabyte. Tegile says the T3400’s effective capacity is 1PB assuming a 5:1 compression and deduplication ratio.

It looks to us at the Vulture storage desk that Tegile has out-gunned Nimble on the flash hardware front.

The CS700 has high-performance triple parity RAID for enhanced data protection with no negative performance impact.

Nimble’s veep for worldwide marketing, Dan Leary, said: “We’ve built a solution that can span a larger set of workloads with more performance and cost efficiency than any other flash solution on the market.”

Customers can move from having separate storage arrays for performance-optimised applications, capacity-optimised ones and backup-to-disk data protection to a single Nimble Storage system, which can scale up to the CS700 and a 4-node cluster.

Should customers go for an all-flash system or a hybrid? IDC research director Eric Burgener said: “Application workloads that require lots of performance and relatively little capacity will migrate more towards all flash array architectures, and those applications that require lots of capacity and relatively less performance will probably find hybrid array architectures more cost-effective.”

Our CS700 takeaways are faster controllers, more flash, and better cache usage, all adding up to a more capable system that can cope with bigger and more diverse workloads.

Existing Nimble customers can grow non-disruptively from their current products to the CS700. The all-flash shelf and C2700 will be available later this month. No pricing information was provided. ®