CIA rendition jet was waiting in Europe to SNATCH SNOWDEN

Unmarked Gulfstream tracked as it passed above UK

At the time, Washington was demanding that Moscow should hand over the fleeing Snowden into US custody.

"We expect the Russian government to look at all options available to expel Mr Snowden back to the US to face justice for the crimes with which he is charged," a National Security Council spokeswoman told reporters. The US also urged countries in the "Western Hemisphere" not to let him in. 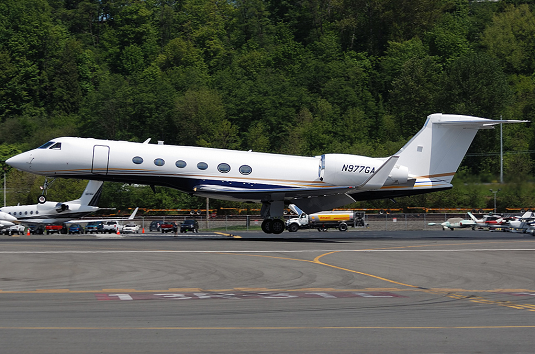 The black jet is actually white.

The Kremlin's response, however, was a big "nyet". Russia's Interfax News quoted government sources as saying:

"Snowden has not committed any crimes on Russian territory ... Russian law-enforcement agencies have received no instructions through Interpol to detain him. So we have no grounds."

N977GA has a chequered history. It was originally ordered by the US Air Force for use as a general's flying gin-palace. But then, shortly after 9/11, it lost its military livery and acquired civilian registration as N596GA. Under that designation it was employed in CIA "renditions" - or kidnappings. In 2011, the "black" jet switched roles again, transferring from the CIA's contractor to use instead by the Department of Justice (DoJ).

With its new tail number N977GA the plane became part of the Justice Prisoner and Alien Transportation Systems (JPATS), operated by US Marshals. On perhaps its best-known mission, the jet flew a team of marshals into the UK on 5 October 2012 to collect radical cleric Abu Hamza after the USA won an extradition order against him.

Only Vladimir Putin's intransigence saved Snowden from a similar travel package, complete with free one-way ticket home and fitting for a stylish new orange outfit. Abu Hamza was last seen waving goodbye from a back window on N977GA.

According to Mr Snowden's colleagues, if the Russians knew that an American team was on its way to bring him home, they did not warn him. In the event the "black" (actually white) Gulfstream and its posse of marshals got no further than Copenhagen as US negotiations with the Kremlin failed to prosper. But Snowden remains in Russia to this day - and potentially for the rest of his life.

The US Department of Justice did not respond to our requests for information regarding N977GA and its purpose in heading to Europe on 24 June last year. ®