Cisco: You think the internet is clogged with video now? Just wait until 2018

'We are firmly in the Zettabyte Era,' says networking megafirm exec in new report

Networking megafirm Cisco has released a numbingly comprehensive report forecasting IP traffic up to and including 2018, which comes to the unsurprising conclusion that the market from which Cisco earns its bread and butter will continue to balloon for the foreseeable future.

The Cisco Visual Networking Index (VNI) contains a tsunami of estimates of projected IP traffic based on what the company terms "a combination of analyst projections, in-house estimates and forecasts, and direct data collection."

"Today, we are firmly in the 'Zettabyte Era' and witnessing incredible innovations and shifts in the industry," said Cisco VP of products and solutions marketing Doug Webster when announcing the VNI, citing what he called the "Internet of Everything", network mobility, and the onslaught of 4K video as primary drivers of the projected increase in IP traffic.

Here are a few nuggets of how the VNI sees the future: 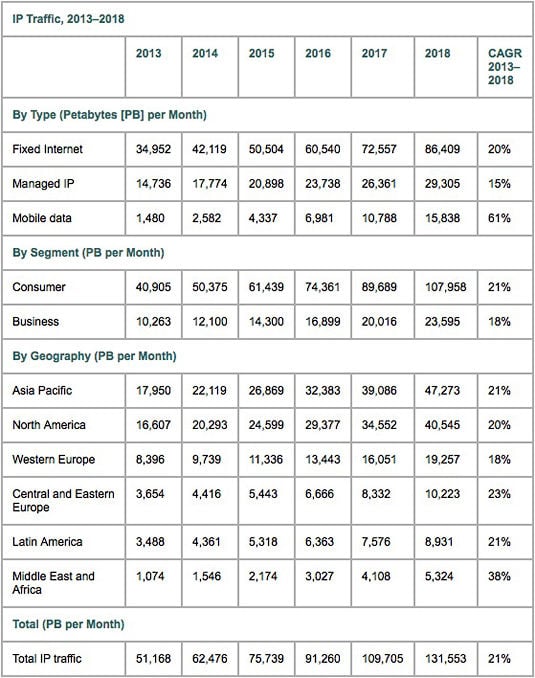 If your eyes glaze over when scanning table after table, Cisco also provides an interactive graphic that will let you click through to the high points. And if you want to dig deeper, check out "The Zettabyte Era – Trends and Analysis", whose 6,750 words, 19 graphs, and seven tables will provide some light reading.

But if you'd rather boil it down to one simple take-away, may we suggest the following: by 2018, 1.6 zettabytes per year will be flowing through the late senator Ted Stevens' "series of tubes".

Or, as Cisco explains, "It would take an individual over 5 million years to watch the amount of video that will cross global IP networks each month in 2018." ®