The doc, available as a download from Pure Storage (guess who's done well in the analysis) after registering a few details. It looks at both SSDs and all-flash arrays, which Gartner calls Solid State Arrays (SSAs) and IBM comes out as the leading SSA shipper – with Pure Storage second.

SSAs are defined carefully: ”SSAs are scalable, dedicated, solutions based solely on solid-state semiconductor technology for data storage that cannot be configured with HDD technology at any time. As distinct from SSD-only racks within ECB storage arrays, an SSA must be a stand-alone product denoted with a specific name and model number, which typically (but not always) includes an operating system and data management software optimised for solid-state technology.”

To cut a long story short, Dell and HDS all-flash array products are excluded, as are all-flash versions of – for example – EMC VMAX and VNX, and NetApp FAS arrays.

The SSD category embraces PCIe flash cards and also includes “self-contained solid-state NAND dual in-line memory modules (DIMMs), which must be used in dedicated slots in servers. Mainstream PC SSDs being used in servers are counted in this category due to end consumption.”

We’ll graph the information here, and you can read the detailed numbers by downloading the doc. The SSD info starts with worldwide vendor revenues: 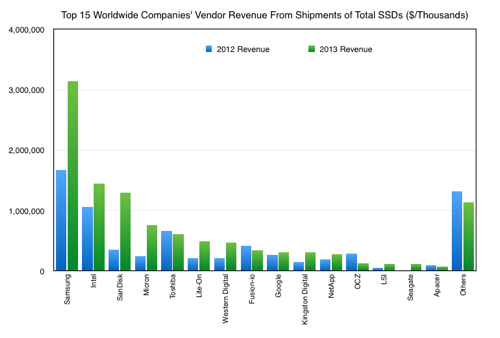 Samsung as top dog got most of that with Intel, growing less, at number 2. Look at Sandisk’s rocketing growth up into the no 3 slot, closely followed by Micron. Toshiba held its fifth place but didn’t grow much. WD grew, Fusion-io declined and now we’re in the tail-enders. 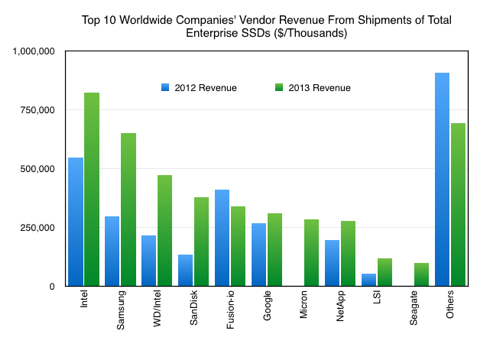 Intel is top dog, not second-placed Samsung. WD, with its HGST/Intel SSDs is in third place followed by SanDisk successfully exhibiting its enterprise supplier credentials. Then there’s Fusion-io, which declined 2012 - 2013, Google with its internal use - amazing - Micron is a, we think, in a disappointing sixth place, NetApp a, for it, strong seventh then LSI and Seagate. EMC does not appear at all.

Now for the SSA numbers. 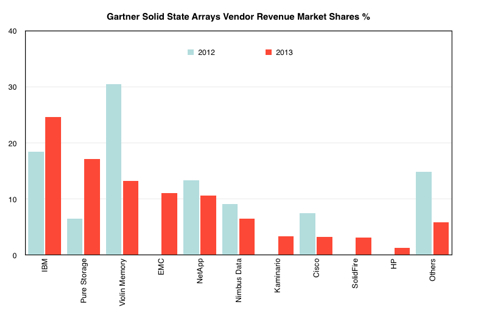 And here the actual SSA revenues by vendor: 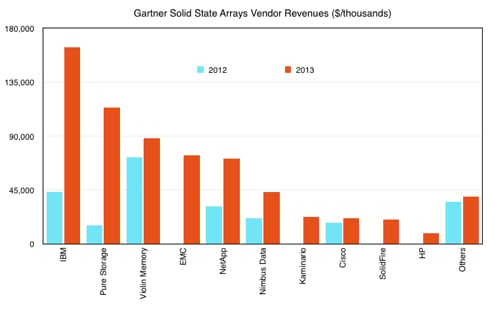 IBM has had a wildly successful 2013 year, solidly overtaking Violin Memory to claim a dominating number 1 slot. Pure Storage has rocketed to the number 2 position in 2013 while Violin Memory slumped from first place in 2013 to third in 2013, illustrating the new management team’s uphill task. EMC has sprung into fourth place from a standing start and NetApp is not far behind in the fifth slot. Then there’s Nimbus Data and tail-ender Cisco - a dismal showing for the networking behemoth in our view, with startup SolidFire very close behind.

The Gartner analysis contains more data, segment metrics and so forth. It’s worth a download and read if you’re interested.

Main takeaway? Big Blue really is big in SSAs, Pure Storage is living up to its hype, and the SSA market is growing at a fast lick. NAND the story goes on. ®