Just in time for the multilingual, global sportsgasm that is World Cup 2014, Twitter has added Bing Translate to its iOS apps for Apple's iPad and iPhone. 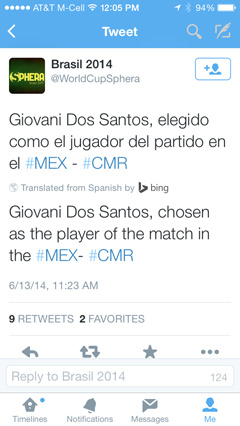 It's another iOS win for Microsoft's Bing. Last week, Apple SVP for internet software and services Eddy Cue casually announced in passing during his part of the keynote of Apple's recent Worldwide Developers Conference that Bing would become the default search in iOS 8 for iDevices' "you ask, she answers" feature, Siri.

Now it's in Twitter's iOS apps for the iPhone and iPad.

In our limited testing, Bing Translate did acceptably well with simple phrases in Spanish, but when we turned to, shall we say, more esoteric languages – at least here in the US of A – it became relatively Google Translate–like.

For example, when we asked Bing to translate a tweet by the Turkish-speaking Ufuk WORLDCUP, "Tamam kas falan her şeyi yapmışsın on numarada o kafayla kız değil de çimento kaldırırsın kardeşim sadece," we were told that he had tweeted, "Okay, you made a number of muscle and everything that's not the girl with the head on the cement raise your brother only."

Google stumbled just as badly, rendering the same line as "Okay muscle or something you've done everything on the number of head girl he does not remove the cement, my brother just."

Or maybe Ufuk WORLDCUP is simply a raging looney. Any Turkish speakers out there who might let us know which translation engine gets closer to his true intent? ®