How practical is an electric car in London?

Free parking? No Congestion charge? Perhaps, but it's still not a good idea

Comment If you revel in the independence a car gives you, then electric is not for you. The quoted range of 100 miles (161km) sounds fine, but that's a bit like a quoted ADSL speed. Your mileage may vary.

The truth is that if and when the car goes flat, you are in deep doo-doo. Run out of petrol and you can walk to a petrol station, fill up a can and walk back. Run out of amps and you need to be close to a charging point. This massively impacts on the perception of range.

You really don’t want to be further from home, or at least a guaranteed charging point, than the power you have left – and probably with a lot in hand. While sitting in stationary traffic doesn’t use much power, it’s hard to get over the internal-combustion-engine mindset that it does and panic sets in. The quoted range is ambitious, too; it’s probably closer to 60 miles (about 96km) and so you never really want to be more than 20 miles or 30km from home.

Range against the machine

With our test drives, The Reg used Source London charging points. The dream is free parking in London, with a charging post, for £10 a year. In practice it’s more complex – a lot more. Many of the points have a three-hour limit. This depends on the borough: in the case of this trial, Islington. I went out at lunchtime to move the car to get a second three hours, got lost looking for the second point, found it and it complained that I was still within the three-hour limit. So I drove back to the first point and it let me charge again. 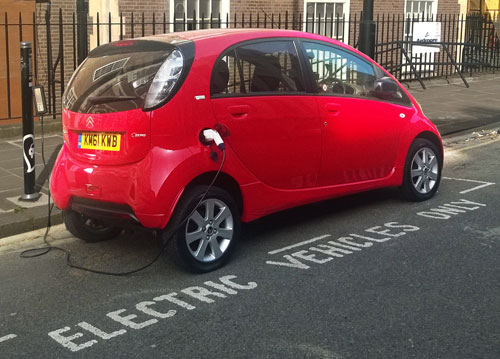 I tried the points in Berkeley Square several times which always had something on charge – Leafs, i3s and those dreadful G-Wiz cookie jars, and with I-MiEVs waiting in nearby spaces. The three spaces in Cavendish Square NCP were also full. I ended up parking in another NCP, paying £13 to park and taking two taxis to get to and from my meeting.

A significant problem with the charging points is not just that there are not enough of them – everyone wants the transport infrastructure to favour their preferred mode over the others – but that the technology is poor. With a Boris Bike there are apps which will tell you where the nearest bike docking station is, how many bikes are left and how many spaces there are.

With the Source London chargers, there is no way to know if the space you are heading for is occupied, how close the occupant is to the three-hour limit – or even if there is a limit. A lot of the points are in car parks, where the saving on power is massively outweighed by the cost of parking.

The one trick TfL hasn’t tried – and really should – would be allowing electric cars to drive in bus lanes. There are few enough electric cars in London and there is a precedent in that California allows electric cars with no passengers to use its car pool lanes, which are usually reserved for cars with three or more people.

The management of Source London is being handed over to a new company and there are plans to make the system more intelligent and to have Boris Bike-style cars, but I’d wait for it to happen before committing to it. ®