Only New Horizons can prove if Charon once had water

The cracked face of Pluto’s moon Charon could indicate the satellite's core was once warm enough to hold a subterranean ocean, according to NASA boffins. 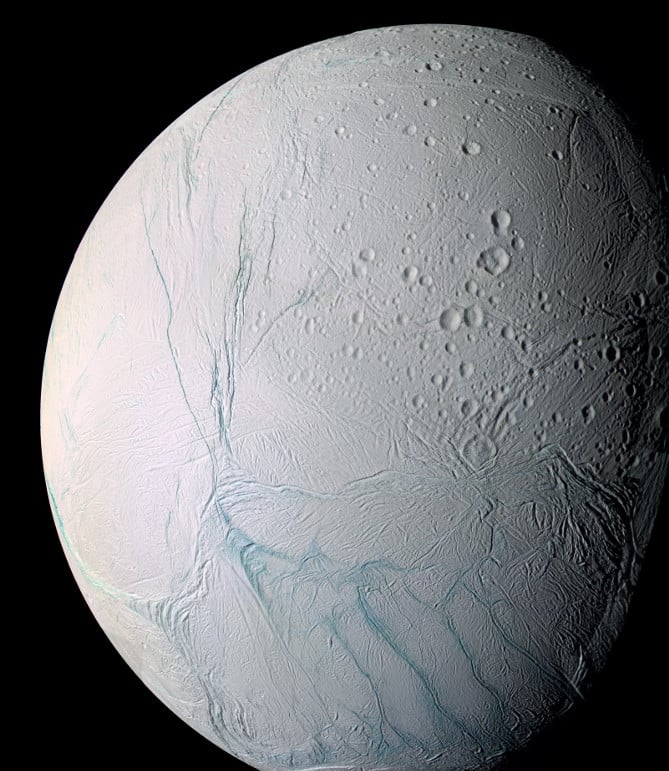 Pluto and all its moons lie in a bitterly cold environment, orbiting the Sun more than 29 times farther out than Earth does. The surface temperature on the one-time planet (now characterised as an a "dwarf planet") is about minus 229˚C (-380˚F), far too frigid to allow any liquid water.

Charon is in the same icy environment as its brothers, but the inside of the moon could be a different story and NASA scientists are hoping that the agency’s New Horizons spacecraft, which will be the first to visit Pluto and Charon in July next year, will show them if they’re right.

"Our model predicts different fracture patterns on the surface of Charon depending on the thickness of its surface ice, the structure of the moon's interior and how easily it deforms, and how its orbit evolved," said Alyssa Rhoden of NASA's Goddard Space Flight Centre.

"By comparing the actual New Horizons observations of Charon to the various predictions, we can see what fits best and discover if Charon could have had a subsurface ocean in its past, driven by high eccentricity."

The cracked surfaces of both Jupiter’s moon Europa and Saturn’s moon Enceladus are evidence of oceanic interiors – a similar pattern at Charon could show the same thing.

These moons are moving in eccentric orbits, because of the gravitational tug-of-war going on between their parent planets and other moons in the vicinity. The slightly oval-shaped orbits cause daily tides that flex the interiors of the moons and stress their surfaces. Researchers reckon that this tidal heating has kept the moons’ innards warm and their subsurface oceans liquid.

The same forces may have operated on Charon in the past, giving the moon a highly eccentric orbit generating large friction and surface fractures from huge tides.

Charon is unusually massive compared to Pluto, around one-eighth its size, and is believed to have formed close to its parent after a giant impact threw material off to form Charon and several smaller moons. With the two bodies orbiting so closely, there would have been strong tides on both worlds causing their surfaces to bulge towards each other.

The resulting friction in their interiors would have lagged slightly behind their orbital positions, acting like a brake on Pluto that caused its rotation to slow while transferring that rotational energy to Charon. The extra boost would have sped up Charon’s revolutions and caused it to move farther from its parent.

"Depending on exactly how Charon's orbit evolved, particularly if it went through a high-eccentricity phase, there may have been enough heat from tidal deformation to maintain liquid water beneath the surface of Charon for some time," said Rhoden.

"Using plausible interior structure models that include an ocean, we found it wouldn't have taken much eccentricity (less than 0.01) to generate surface fractures like we are seeing on Europa.

"Since it's so easy to get fractures, if we get to Charon and there are none, it puts a very strong constraint on how high the eccentricity could have been and how warm the interior ever could have been.

"This research gives us a head-start on the New Horizons arrival – what should we look for and what can we learn from it. We're going to Pluto and Pluto is fascinating, but Charon is also going to be fascinating," she added.

Based on telescopic observations, Charon is now in a stable end state orbit – going around Pluto in a circle, with both bodies’ rotations slowed to the point where they always show each other the same side. Any underground ocean on the moon is likely to be frozen by now, but it could still hold evidence of ancient life.

The subterranean seas of Europa and Enceladus are considered good candidates for microbial life, since liquid water is a necessary ingredient. Tiny aliens need a lot of other things too – a useable energy source, carbon and nitrogen to name just a few – but Charon could have had these elements in the past too. ®