Buy our software package and we'll support your cheaper stack

Asigra has devised a server + storage configuration for cloud providers using its backup software that it claims is cheaper than Dell or HP kit.

It is essentially selling its backup software together with a promise to enable customers to buy a complete underlying software and hardware server, networking and storage stack, with Asigra supporting all the software and cutting their costs significantly.

Asigra can do this because it has a software-defined data protection architecture (SDDP) which "shifts control of the backup environment from hardware to software to remove physical cost limitations." In other words, customers can use commodity server/storage software and hardware and avoid paying any mainstream system supplier tax.

It has supplied example configurations to make its point. Here's an HP one that can run HP's backup software: 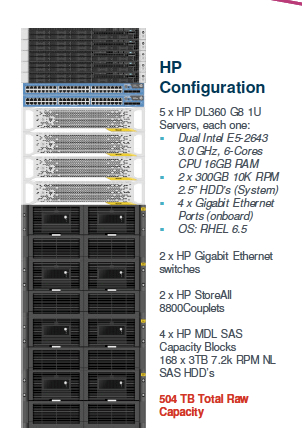 Then it redesigns the system to use purely commodity components, such as Supermicro servers to run Asigra's own backup software: 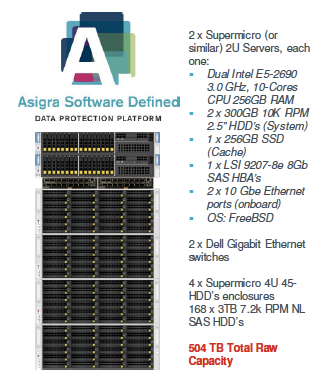 Both configurations have 504TB of capacity, using 168 x 3TB drives spinning at 7,200rpm, and two gigabit Ethernet switches. The Asigra config uses FreeBSD software and ZFS, with Asigra providing support for both. It says it has lowered its partners' costs with its recovery-based licensing model

The overall idea here is to provide an Asigra stack from the disks at the bottom right up to the Asigra cloud backup software at the top with Asigra providing all backup support and so offering a lower cost alternative to using Dell or EMC or HP hardware. Typically, Asigra says, its kit will be as little as half the cost of a mainstream vendor's.

Life in the cloud backup world for cloud service providers will be eased, Asigra says, because of:

Asigra says its SDDP, aligned with Asigra Cloud Backup, will be a free download at no cost to Asigra partners. It is, it says, "already engaged with multiple prospective OEM system vendors who are interested in offering SDDP to drive sales of their component hardware products." There's nothing to buy yet though.

You can hear more if you attend the Asigra partner summit taking place in Toronto, Canada from 16 to 18 June. ®

Opinion Excuse me, citizen, did you packet this data yourself?
CSO6 Feb 2023 |

Who, Me? In the age of tractor-fed printers and perforated paper, telling a junior to tear it up was close to negligence
On-Prem6 Feb 2023 | 8

You’ve had almost two years to patch and some of the software is EOL, now attackers déployer un rançongiciel
Security6 Feb 2023 | 4

Dear government, this thing is written by volunteers. Take it up with them. Also: shouldn't you know this already ?
Personal Tech6 Feb 2023 | 6