Some algae have a gene that crimps their ability to photosynthesise

Researchers looking at the way algae use quantum mechanics in photosynthesis have found a genetic switch that turns the critters' “quantum coherence” on or off.

It's been known for some time that photosynthesis takes advantage of quantum mechanics to improve light harvesting. As this IOP Science article explains in some depth, coherence helps excitons carry energy efficiently to the reaction centre of the cells performing photosynthesis.

The excitons themselves are the electron-hole pairs created when light strikes the organism.

It's the kind of phenomenon that gets attention from many fields beyond biology. For example, efficient light harvesting is of great interest to solar power researchers, and as the IOP Science author Seth Lloyd explains, it seems that photosynthesis manifests as a kind of quantum computation called a “quantum walk”*. 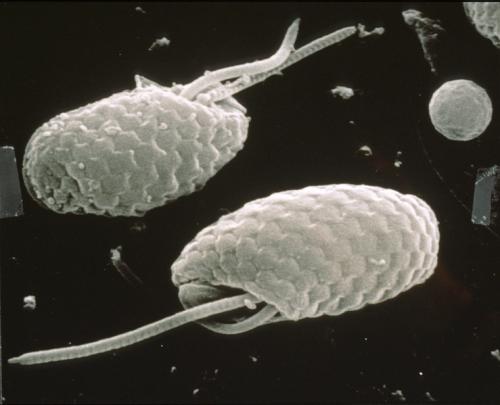 Cryptophytes have a genetic mutation that turns quantum mechanics phenomena on or off. Image: CSIRO

The latest research, published in PNAS (abstract here) turns up another interesting characteristic of biological quantum mechanics. In a variety of algae called cryptophytes, which live at the bottom of lakes or even under ice sheets, there's a genetic trigger for whether or not coherence exists in a particular individual.

Over to University of NSW researcher professor Paul Curmi, who led the research: “Most cryptophytes have a light-harvesting system where quantum coherence is present. But we have found a class of cryptophytes where it is switched off because of a genetic mutation that alters the shape of a light-harvesting protein,” he says in the university's media release.

As the paper's abstract explains, the mutation inserts an amino acid into the proteins that act as light receptors (pigment protein complexes), changing its configuration and disrupting “the strong excitonic coupling between two central chromophores”.

At this point, Curmi says, the role of coherence in cryptophyte photosynthesis isn't fully determined. It has, however, been observed in the Green Sulphur Bacteria where it's also believed to have evolved to improve the efficiency of photosynthesis.

*Bootnote: “Quantum walk” refers to a kind of quantum mechanical solution to the “travelling salesman” problem. Instead of an iterative path-by-path test of the possible paths through a network, the quantum “walker” exists as a superposition of states across many many paths. Those states can converge quickly on the optimal path.

In the case of photosynthesis, the excitons are seeking the optimal path to the reaction centre, and the Seth Lloyd paper explains that this happens at the picosecond scale.

Think that through again: although it's a very simple, single-problem solver, algae seem to have evolved a working quantum computer. ®