NASA’s Hubble Telescope committee has approved a plan to have the space 'scope search for something beyond Pluto for the space agency's New Horizons craft to visit after it flies by next summer. 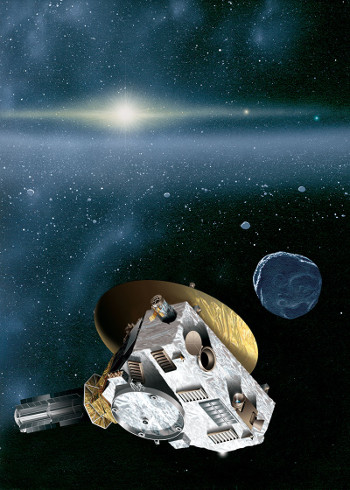 The New Horizons mission is scheduled for a flyby of the one-time planet in July 2015, after launching back in 2006. After a journey of nearly ten years and more than three billion miles, New Horizons hopes to beam back valuable new insights into Pluto and its moons.

The Hubble Space Telescope is in popular demand for boffins and even has its own Time Allocation Committee to help decide what it should be observing.

New Horizons has won a slot in which the telescope will search a small area of the sky beyond Pluto for a Kuiper Belt object (KBO) the spacecraft could visit.

The Kuiper Belt is a vast debris field of icy bodies left over from the formation of the Solar System. None of them have ever been seen close up because they range as far as five billion miles from Earth.

Nevertheless, the mission has only won enough time to scan the sky in the direction of the constellation Sagittarius to try to identify any objects orbiting in the belt. To figure out which are icy KBOs and which are background stars in the constellation, Hubble will pan across at the predicted rate the objects are moving. This should make other stars streak in the images while KBOs stay steady as pinpoint objects.

This test needs to turn up at least two KBOs of a certain brightness to demonstrate that Hubble has a statistically good chance of picking out an object for New Horizons to visit. If it does, the mission will then get a second allotment of time to keep searching for the best one to attempt.

Although Hubble is powerful enough to see galaxies near the horizon of the Universe, finding a KBO is still going to be tough. A typical object in the field along the New Horizons trajectory could be no larger than Manhattan Island and as black as charcoal, NASA said.

Even without the KBO New Horizons has plenty to be getting on with. As well as its Pluto flyby, the craft will be checking the Charon moon for cracks that might indicate a subsurface ocean and investigating four other small moons orbiting Pluto and Charon spotted by Hubble.

The telescope has already made the rest of the satellites mission easier by mapping Pluto’s surface to help with New Horizon’s recon photos and searching for potentially hazardous dust rings around the dwarf planet that could impede its mission. ®