Facebook goes TITSUP across WORLD! Who will look at your cousin's baby NOW?

Images of Britain's breakfasts failed to make their way onto the internet this morning after Facebook collapsed, sending the interwebs into social media withdrawal.

Anyone visiting Zuck's site was shown the following message: 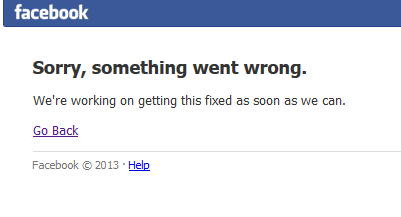 Distraught Facebookers resorted to social media methadone - or Twitter, as it's otherwise known - to make sure the world knew about their anger.

Some twits suggested the problem was due to an Anonymous DDoS attack, although this cannot be confirmed.

Reports @facebook experiencing problems at the moment. Sure a helpline for Candy Crush Saga fans is being set up as we speak .#Facebook

oh! let's start the rumor that #facebook shutdown to prevent wikileaks from publishing data about them! probably not true, but a fun lie.

Welp, facebook is dead. The world is a better place now.

Are you worried about Facebook's demise? Virgin Media is here to help.

There appears to be a problem with Facebook at the moment. If you need help and support we're live on twitter until 10pm.

Are you affected? Is this best thing to ever happen to the internet? Let us know. ®

Ex-MD Jens Amail returns to Germany, and we can't blame him

Utes gotta be kidding me... University of Utah handed $457K to ransomware creeps