T-Mobile boss: 'High and mighty' Verizon and AT&T are 'raping you for every penny you have' 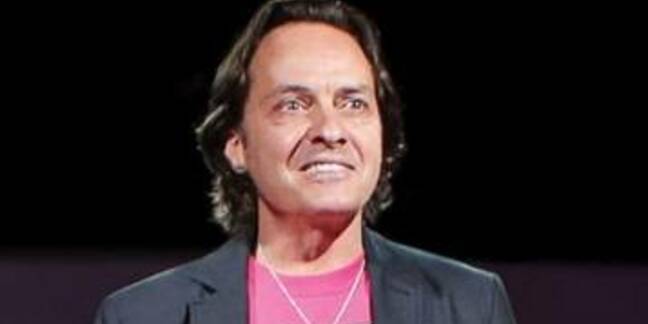 Updated T-Mobile CEO John Legere is outspoken at the best of times, but went further than ever before in his criticism of the conduct of Verizon and AT&T in the US market at the company's latest Un-carrier initiative launch.

"These high and mighty duopolists that are raping you for every penny you have," Legere said. "The fuckers hate you."

Legere was speaking in Seattle at a press event to launch the fifth stage of the company's Un-carrier plan intended to disrupt the US mobile market. Past initiatives have included abandoning two-year contracts, reimbursing cancellation fees from rival firms, and offering (sort of) unlimited data plans.

On Wednesday night, Legere announced two new ways to woo customers. First, he encouraged mobile users to try an iPhone 5s free of charge for a week with unlimited data, which should help reassure those worried about the strength and spread of T-Mobile's LTE network.

"While the carriers ask you to buy blind, the Un-carrier gives you transparency. Our network kicks ass, and now people can experience for themselves what a data-strong network can do with T-Mobile Test Drive," Legere said.

Participants who sign up will be sent an iPhone in the mail after submitting a credit or debit card capable of covering the $699.99 cost of the handset. They can then return it after seven days to any T-Mobile shop and pay nothing, or stump up a $100 fee if the phone is damaged.

Second, Legere announced a deal with online streaming service Rhapsody to provide unRadio – an ad-free music-streaming service with unlimited track skipping which doesn't count towards user's data plans. Rhapsody unRadio is free to those who have signed up to T-Mobile's Simple Choice unlimited data plan, and $4 a month for other users. ®

IN addition T-Mobile is also allowing free streaming from other internet radio sites, like Pandora, iTunes Radio, and Spotify, under its new Music Freedom initiative. It's also asking for suggestions of other streaming services to add to the program.

John Legere has apologized on Twitter for his choice of words at last night's T-Mobile event.

I know I have an Rated R vocabulary, but even I can go too far. Sincere apologies to anyone offended last night

The drawback to having no filter when I speak… sometimes I need a filter. Genuinely apologize to those offended last night