The next version of Google's Android smartphone OS may ship with a new code execution engine that improves performance and battery life, if a new report is to be believed.

The current engine, Dalvik, is getting long in the tooth, and developers have long grumbled that it doesn't run their code as efficiently as it could.

Google's answer is the Android Runtime, or ART for short, a drop-in replacement for Dalvik that brings performance-enhancing features such as ahead-of-time (AOT) compilation and improved garbage collection to the Android platform.

The online ad-slinger snuck ART into Android 4.4 "KitKat" as an experimental feature, but it could only be enabled from an Android device's hidden developer options.

In fact, the ART developer homepage explains that "Dalvik must remain the default runtime or you risk breaking your Android implementations and third-party applications," and adds that "some techniques that work on Dalvik do not work on ART." 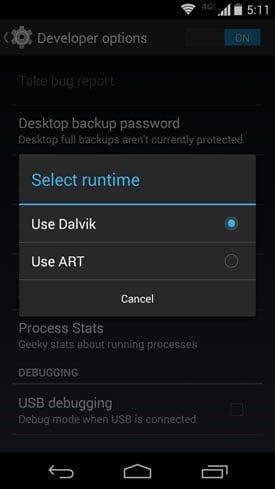 ART has been a hidden option on KitKat devices

The Android developers must have been giving ART some serious attention, however, because it looks like the next version of the OS could drop Dalvik altogether.

The change was first spotted by the Android hacker community at XDA Developers, who noticed two curious code commits in the Android Open Source Project. The first removes Dalvik from the main branch of the Android source code, and the second switches the default runtime to ART. Several other changes have since been added that also remove references to Dalvik.

Not that this is any indication that Android devices will start using ART by default any time soon. The code changes were made to the Android Open Source Project, but Google uses its own, internal source code trees to build shipping versions of Android.

Don't expect the switch to happen a future version of KitKat, either, which is currently on version 4.4.3. A change like this is likely too big for a minor point release. And there's little reason to believe that Google plans to launch a major new version of the OS in the near future, when only 13.6 per cent of Android devices are running KitKat now.

But given a change this definitive – the developers even went as far as to post a commit message reading, "Dalvik is dead, long live Dalvik!" – it wouldn't be too much to suspect that ART might have its official debut in Android 5.0 ... whenever it arrives. ®