#YO_NO! Messaging app 'Yo' gets hit by hackers

Well, at least someone found a use for the thing...

Just days after the Yo app debuted to much fanfare (and head-scratching), the mono-message social tool has fallen prey to hackers.

A group of students from Georgia Tech University claim via TechCrunch to have accessed the application's entire user database, and gained the ability to obtain the phone number of anyone currently using the one-word messaging platform. 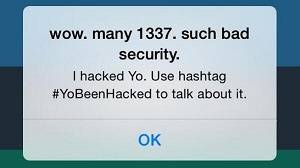 Additionally, the students said they had the ability to send any individual user or any group of users custom text messages via the service. They also say they can send push notifications and spoof Yo messages.

Shortly after the report emerged, users on Twitter began spreading messages of the proof-of-concept examples. The company has not confirmed the specific details of the TechCrunch report, but did say that it was working to address an unspecified security problem.

We are working on the securities issues that came to our attention. We want you to know we take this very seriously.

The hack comes after Yo was thrust into the public light when it was revealed that the one-word messaging app, despite being of questionable value and usefulness, had received $1m in funding from the venture capital community.

This latest incident could leave some investors questioning their decision. Then again, given the amount of buzz the app has generated in the past week, Yo's backers may not mind at all... ®