We don' need no steenkin' causality*

University of Queensland researchers have doubled-down on the question of whether quantum mechanics can exhibit “time travel” behaviours, producing a simulation of time travel using a single photon following a “closed timelike curve” (CTC).

No, it's not actually time travel. Rather, the UQ work is looking at what we can predict about quantum systems if time travel ever does exist, based on the behaviour of a very simple two-photon quantum computer.

(CTCs don't actually exist so far as we've observed, they're just predictions of the field equations in general relativity - making them an interesting field of study for physicists.)

The UQ boffins have produced a two-photon simulation designed not to execute "time travel", but to try and test predictions of what happens to quantum mechanics if a quantum could be induced to traverse a CTC. It turns out that things we're used to in quantum mechanics in the non-relativistic world break "in really interesting ways", as UQ professor Andrew White told The Register.

The work is published in Nature, here.

The "right conditions" to get a quantum to traverse a CTC aren't likely to exist any time soon: White said we'd need to put quantum systems in the presence of “strongly relativistic” effects like being near black holes – and so far, such conditions haven't been found on Earth.

Instead, “the time-travel was simulated by using a second photon to play the part of the past incarnation of the time travelling photon”, according to University of Queensland PhD student Martin Ringbauer.

How does this demonstrate time travel? According to The Speaker, Ringbauer said, the mathematical equivalence between two different time-travel “cases” is the key.

How to simulate time travel

To untangle all of this, professor White explained to Vulture South that since the late 1980s, quantum physicists have asked what would happen if quanta, rather than “classical-scale” objects, found themselves in CTCs. 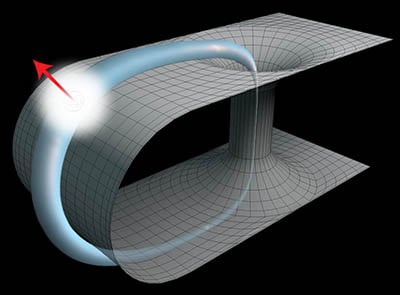 This could be tested a couple of ways, he said: since quantum mechanics works on probabilities, you could design an experiment “so that what goes into the time machine has the same probabilities as what comes out”.

It's the second kind, the wave function match across time by a single quantum (predicted by physicist David Deutsch, White said), that they sought to test.

The kit they used is familiar in any university quantum computing laboratory. By shining a bright laser through nonlinear crystals, the lab generated photon pairs, which were passed through a linear optic entangling gate. The measurements are then made by (again familiar) single photon counting modules.

The implications of the work are probably esoteric for now, White said. For example, what they've been able to demonstrate is that in the presence of a time machine, the “no-cloning” theorem that prevents the perfect copying of quantum states breaks down.

No-cloning is part of the basis of quantum cryptography (you can't copy the state of the quantum that's carrying a key from Alice to Bob, without destroying the state you copy and letting Alice and Bob know you're there), as well as quantum computing.

In other words, in the presence of strong relativistic effects, White said, quantum crypto, quantum computing – and Heisenberg's uncertainty theorem, except this poor hack doesn't quite understand why – can all break down.

As already noted, humans are unlikely to encounter sufficiently strong relativistic fields any time soon. White noted that one of the suggestions for creating a closed timelike curve would be to get three black holes, line them up, and start them spinning.

So our quantum crypto is safe for now, at least. ®

*Bootnote: Actually, causality is also safe. But why waste a chance at a fun sub-headline?

Causality is a funny thing in quantum systems. Even though general relativity doesn't forbid time travel at a macro level, the "grandfather paradox" (killing your own grandfather so you aren't born so you can't kill your grandfather) appears to suggest it can't happen.

On Call Termin-what? Why can't I connect directly to the network
Networks12 Aug 2022 | 2

Required customers to pay for software they did not receive, among other sins
Legal12 Aug 2022 | 10