'Fun' quizzes drill down into your MENTAL HEALTH PROBLEMS

When Buzzfeed first began to offer the world a constant free stream of inane listicles, cat pics and funny fail GIFs, it seemed too good to be true.

Yet it turns out that the world's biggest content aggregator isn't just shiny and happy – it's curious too. In fact, according to a digital marketer, Big Buzzfeed is watching us all.

On his blog, e-commerce and digital marketing expert Dan Barker warned that Buzzfeed was in fact wolfing down large amounts of its readers' data.

"When you visit BuzzFeed, they record lots of information about you," he warned. "Most websites record some information. BuzzFeed record a whole tonne."

Barker also took the following screenshot, which he says shows the info Buzzfeed collects via Google Analytics and its own internal stats. 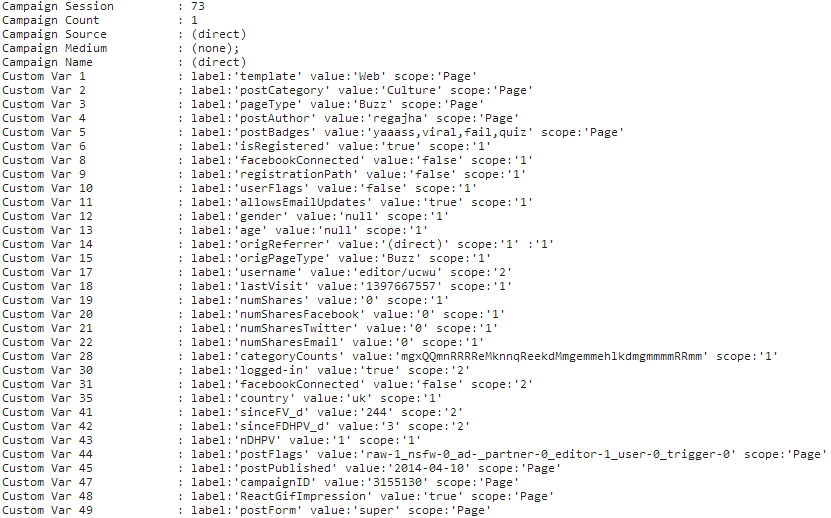 The information captured includes a person's age, whether they are logged into Facebook or not and which country they are in.

But next comes the "scary bit".

Barker cites a quiz entitled "How Privileged Are You?", which is a list of tickbox questions designed to work out how white, male and heterosexual (and therefore privileged, in the weird argot of Twitter) a person might be. In your correspondent's view, the quiz wants everyone but mixed-race, wheelchair-bound, dirt-poor dyslexic transsexuals to feel thoroughly guilty about every single slight moment of happiness they have enjoyed.

It appears, according to Barker's analysis, that data gathered from respondents' answers - no matter how sensitive they are - are stored alongside all the other personal information which Buzzfeed routinely collects. The site's privacy policy not only states that it "may collect geo-location data" from surfers, but also that it "may link location data to other information we have collected about you."

"If I had access to the BuzzFeed Google Analytics data," Barker said, "I could query data for people who got to the end of the quiz and indicated – by not checking that particular answer – that they have had an eating disorder. Or that they have tried to change their gender.”

Would you really feel comfortable telling an advertising company about whether you had undergone gender reassignment therapy or had been prescribed anti-psychotic drugs? Probably not, but that doesn't matter - more than two million people have already splurged all to Big Buzzfeed in the privilege quiz alone.

"I suspect this particular quiz would have had less than 2 million views if everyone completing it realised every click was being recorded and could potentially be reported on later – whether that data is fully identifiable back to individual users, or pseudonymous, or even totally anonymous," Barker added.

Buzzfeed insists that the data is anonymously stored and that is it only interested in information in the aggregate, rather than collecting lots of stuff about individuals.

Dao Nguyen, head of "growth and data" at Buzzfeed, left a comment on Barker's blog which said:

We do not in fact record that it is “you” browsing the site. The string sent to GA is not your username but an anonymized string that is not linked in any way to your account, email address or other personally identifiable information. We are only interested in data in the aggregate form. Who a specific user is and what he or she is doing on the site is actually a useless piece of information for us.

Speaking of data-harvesting media companies, who can forget the rise of Mark Zuckerberg? He looked like an angelic, virginal nerd until it was revealed he was actually a data-grabber who couldn't believe “dumb fucks” would just hand over all their personal info. ®

Clear out of street furniture unlikely though

Google plants self on Silicon Roundabout

Why? Because, errr, data. And, ummm, apps