New list of VSAN Ready Nodes emerges with some oldies, some n00bs and HP 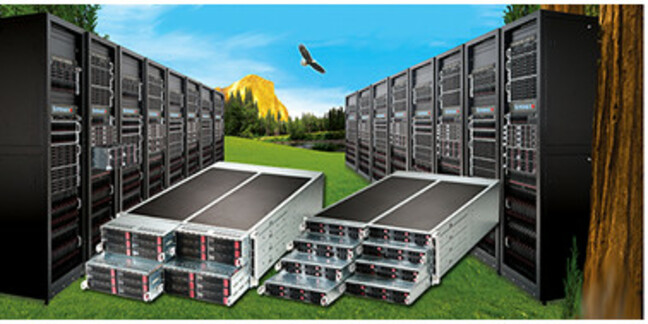 On the day that Nutanix and Dell announced their new relationship, VMware chose to remind world+dog that Dell likes it too by releasing a new list of VSAN Ready Nodes, the disk-packed servers signed off as suitable to run its virtual storage area network.

The new list (PDF) of VSAN Ready Nodes is notable for a few reasons.

One is that HP makes an appearance, an eyebrow-raiser because the company has its own virtual storage array in the form of StoreVirtual, aka the artists formerly known as Left Hand. That HP is throwing resources at a direct rival is a handy endorsement that VMware will be smiling about.

Another item of interest is that the new list now matches Ready Nodes to usage scenarios. There are now products suggested as capable of running 15, 30 and 60 virtual machines, plus boxes suggested for 100, 250 and 400 linked VDI clones.

VMware's been a little bit naughty with the post announcing the new list, as it suggests it offers “24 new” devices. That's not quite true because, for example, Dell's PowerEdge and R620 and R720 have previously earned mentioned in despatches. The difference this time around is that the new list offers a complete spec for each node, with the devices listed including a complete list of components needed to get them up and running under VSAN.

That's handy because it means when would-be VSAN buyers look at speccing up boxes, they'll know exactly what to enter into server vendors' online configuration tools. It will also make VSAN-to-SAN price comparisons rather easier.

As we've noted elsewhere, Dell's deal with Nutanix is very significant. Which begs the question: did VMware try to crash the pair's launch party with this new list, or was the timing coincidental?

One other thought: Dell's decision to make its networking kit software-agnostic was bold. The company's deal with Nutanix signals it may be willing to give other markets a similar shake. ®