Entry-level performance with a mid-range price

Review Two data points do not a trend make, but the two most recent Mac updates from Apple have been more notable for their price cuts than for any innovative technologies or eye-catching design gimmicks. 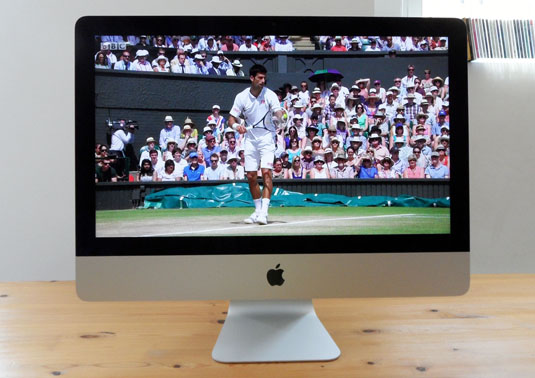 Apple's new baby is limited to just one upgrade: from HDD to SSD

Last month, the MacBook Air got a £100 price cut that helped to make its ageing design a little more palatable, and this month sees the iMac getting the same treatment. The 21.5-inch and 27-inch models that were released last year are still with us, albeit with £100 lopped off their already hefty price tags. And – shock, horror – Apple also caused a minor ripple of excitement by launching what it refers to as a new "entry-level iMac".

Of course, the term "entry-level" is relative when talking about Apple and the £899 price tag of the new baby iMac would be distinctly mid-range for most other manufacturers.

To be fair, the build quality and slimline design of the iMac still leaves most all-in-one Windows PCs looking like a bucket of Lego, and its glare-reducing 1920x1080 IPS display is a delight to look at. But form-over-function has e’er been Apple’s great weakness, and that premium design is accompanied by only lacklustre performance. 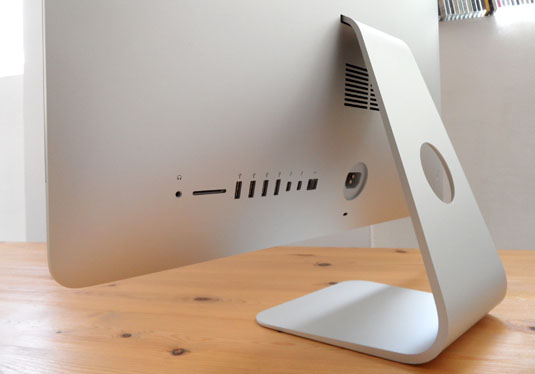 This new iMac model has a much lower specification than any of its siblings, with last year's modest 1.4 GHz dual-core Intel Core i5-4350U Haswell processor, along with 8GB of 1600MHz DDR3 SDRAM and a 500GB hard drive. By contrast, the next step up is £1,049 for a model with a quad-core i5 running at 2.7GHz, a 1TB hard drive and more powerful Iris Pro integrated graphics.

Using BootCamp to install Windows and then run the PCMark 7 benchmark software produced a score of 2370 points. That’s a pretty tame score and reflects the poor performance of the iMac’s 5400rpm hard drive.

The 1.4GHz MacBook Air, on the other hand, with a speedier solid-state drive romps ahead to 4178 points in the same tests. Even when running the Home Computing test suite in PCMark 8 – which is less reliant on hard disk performance – the iMac could only manage 2367 points compared to 2460 for the MacBook Air. 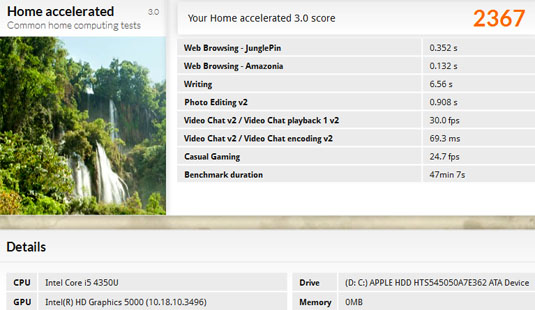 That test suite also reported a casual gaming score of 24.7fps – which turned out to be spot on when I switched back to the Mac OS and fired up the Mac-native version of Batman: Arkham City.

That said, running the game at 1920x1080 resolution with High graphics settings reduced the iMac to just 10fps. By taking the pressure off and dropping to 1600x900 and opting for Medium graphics allowed it to hit 25fps – so it just about scrapes through to some casual gaming by the skin of its teeth.

There’s no way to enhance the iMac’s performance though. The iMac has never been very upgradeable, but this new model has the fixed 8GB of memory soldered onto its motherboard and doesn’t even provide a build-to-order option to increase the memory. 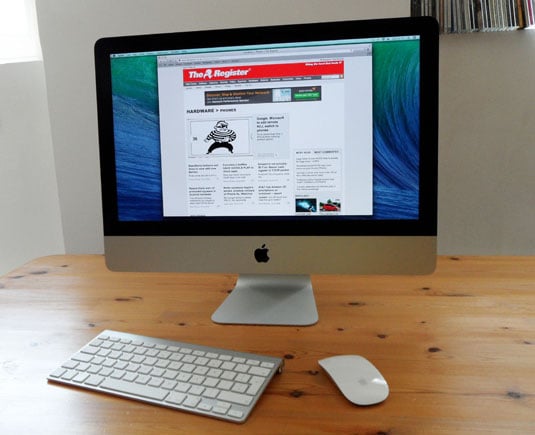 Bluetooth peripherals: you can opt for a wired numeric keyboard and a mouse too at no extra cost

There’s no ordering option to upgrade the processor either, although you can at least get it kitted out with a 256GB SSD for another £200. However, that makes the iMac’s modest performance and lack of upgradeability seem like a particularly cynical form of planned obsolescence. Really, if you’ve got a little extra cash, then the 2.7GHz model will only cost you another £150 and looks like much better value in the long term, but currently only the 27-inch iMac has an easily accessible panel to enable memory upgrades.

Any sign of lower pricing from Apple is welcome, but while an £899 iMac is attention grabbing, its performance just isn’t up to scratch. It’ll handle routine tasks such as web browsing, streaming video or running MS Office well enough, but without an SSD, you're more likely to fare better for more intensive tasks on a MacBook Air, which with a memory boost to 8GB costs just £30 more than this iMac.

Still, if you want the iMac form factor and are planning on keeping it for a while, it makes far more sense to opt for one of the more powerful models in the range, which, thankfully, have just come down in price. ®