UK.gov: Forget Google and those other chaps... Use THIS open Internet of Stuff specification

'HyperCat has a strong security model; it's the same one the web uses'

The Internet of Things is all a question of semantics, according to a government-backed consortium that includes mega tech players like BT, IBM and ARM. 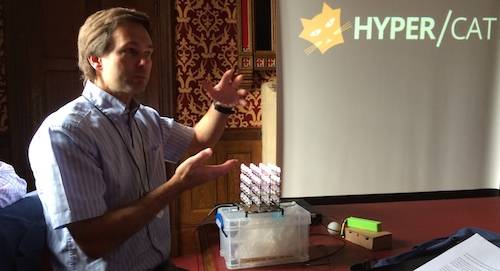 IoT is a "hype term" that within 10 years will simply be referred to as the internet, the boss of start-up 1248 Pilgrim Beart claimed during a presser at the House of Lords on Thursday.

He also said that too many proprietary devices were being developed that had created "vertical silos" with APIs being coded differently. Beart said that clusters of companies got together supported by £6.4m funded by the taxpayer to address that issue.

The end goal is to make machine-to-machine gadgets talk to each other much more easily by opening up data access.

"The first thing everyone said was: well, interoperability is easy, just look at our platforms," Beart joked.

Eventually, the consortium - which is made up of more than 40 Blighty-based tech firms - came up with a new open IoT specification, dubbed HyperCat.

The specification can browse machines, searches by metadata and uses standards such as HTTPS, Restful APIs and JSON as a data format.

"What HyperCat does is it unlocks the ability to 'Google' IoT data effectively. You can now crawl it, you can index it, you can do all the things that machines might do," said Beart.

"HyperCat does not solve every possible IoT interoperability problem by design, it's a very thin layer. All it does is solve the discovery problem," he added.

"A standard [specification] isn't quite as sexy as a wearable or some nice glasses that are going to give you all the information you want," he said before attempting to sprinkle some Tim Berners Lee pixy dust on the project.

"What started the world wide web?" he asked. "A simple British standard. It spread like wild fire ... the power of a standard is phenomenal."

Anderson claimed that there were similarities between HyperCat and some of the original thinking from Berners Lee, who has been punting the notion of the semantic web for about 20 years now.

"We're moving from the vertical silos," he claimed. "They [the Googles and Apples of this world] control it all. If you look at the number of devices that are going to exist on the planet, these are not all going to be produced by one large American or one large Asian company."

Anderson said that the UK should lead on creating such an open specification, but it will be challenged by big name vendors elsewhere. He said:

If you look at what's happening globally. The Chinese clearly are driving forward at a pace with their smart cities and their sensor manufacturing. But what you will find is that they are not looking to open up standards. It's difficult to be able to unpick a Chinese end-to-end solution and try to work out how you might use some of these sensors to make it work within a different environment.

Similarly, in the US, the Flexeye boss noted Google's acquisition of Nest. He said it's not clear how that API, for example, could be used consistently across any device.

Concerns about the Rise of Machines rise of IoT were brushed aside by ARM’s public affairs veep Stephen Pattison.

"HyperCat has a very strong security model; it's a very simple one. It's the same one the web uses," he said. "But privacy is a much more complex problem because that is about humans deciding who sees what under certain circumstances."

Anderson said that one of the policy areas the consortium would need to "take a close look at" was Britain's privacy law because of the "vast amounts of new data that could be linked to us as individuals". ®