Still too early to say 'DARK MATTER FOUND', but the X-rays are encouraging

Astro-physicists remain cautiously (around media) excited (among themselves) about an unexpected X-ray signal discovered in a survey of galactic clusters.

Having first put their findings in the public sphere in March, as reported by The Register at the time, the work has now passed peer review to hit the presses in the prestigious Astrophysical Journal - and re-ignite discussion about whether the rays represent at least a chunk of the missing stuff in the cosmos.

It's the frequency of the signal that's set boffins' imaginations – and their authorial glands – aflame, since spectroscopy even at high energies is sufficiently familiar that something new, which for example doesn't match up with known elements, demands attention. The emission line occurs at an energy of (3.55-3.57)+/-0.03 keV – let's say “between 3.55 and 3.57 kilo-electron-volts.

Perhaps cautious after the recent BICEP-CMB kerfuffle, which still hasn't been completely resolved, the news from ESA and NASA has been given a much more muted reception, a heavily caveated “this will be huge if it's right”.

And huge it would be: the missing matter in the universe remains one of astrophysics' biggest puzzles (along with where they should be looking for dark energy). The world is host to a number of instruments designed to track down dark matter, so far without identifying any signal better than a tantalising “this could be, or maybe not”.

What the analysis of data from NASA's Chandra X-ray observatory and the ESA's XMM-Newton instrument has turned up is an unexpected line in the X-ray spectrum, while looking at the Perseus galactic cluster.

Galactic clusters are among the largest-scale structures in the universe, consisting of galaxies interacting via gravity, along with the hot gas filling the space between them. They're also one of the reasons we believe in dark matter, since the observable mass of clusters (counting the galaxies and the gas) makes up only 20 per cent of the mass needed to provide the necessary gravity. The rest is presumed to be dark matter, made up of … “what, exactly?” is the big question.

Over to NASA's press release: there's a faint X-ray emission line discovered in the analysis of the Perseus cluster, which is matched by the same line in an analysis of another 73 galactic clusters.

The ESA's release explains that while a single image of Perseus showed the line, composite images were needed to detect it in the other galactic clusters.

The research has been posted at Arxiv, here. As NASA puts it: “The authors suggest this emission line could be a signature from the decay of a 'sterile neutrino.' Sterile neutrinos are a hypothetical type of neutrino that is predicted to interact with normal matter only via gravity. Some scientists have proposed that sterile neutrinos may at least partially explain dark matter”.

(NASA goes on to note that 55 other papers offering theories about the X-ray line already cite the original work. Science at work, people.) 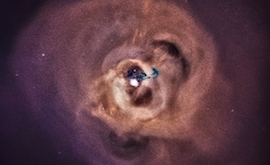 Perseus, about 250 million light years away,

has sparked a search for an X-ray emission.

Co-author Maxim Markevitch from Goddard Space Flight Center says the mere possibility that a signature of sterile neutrinos is exciting, but cautions: “We have a lot of work to do before we can claim, with any confidence, that we’ve found sterile neutrinos”.

Over at the ESA, lead author Dr Esra Bulbul from the Harvard-Smithsonian Center for Astrophysics in Cambridge explains: “If this strange signal had been caused by a known element present in the gas, it should have left other signals in the X-ray light at other well-known wavelengths, but none of these were recorded.”

Dr Bulbul doesn't say that sterile neutrinos might make up all of the missing matter in the universe, only that they could be part of it.