Close-pair binary and their mate

Boffins have found three supermassive black holes orbiting each other at the heart of a galaxy – and the trio could be rippling the very fabric of space and time. 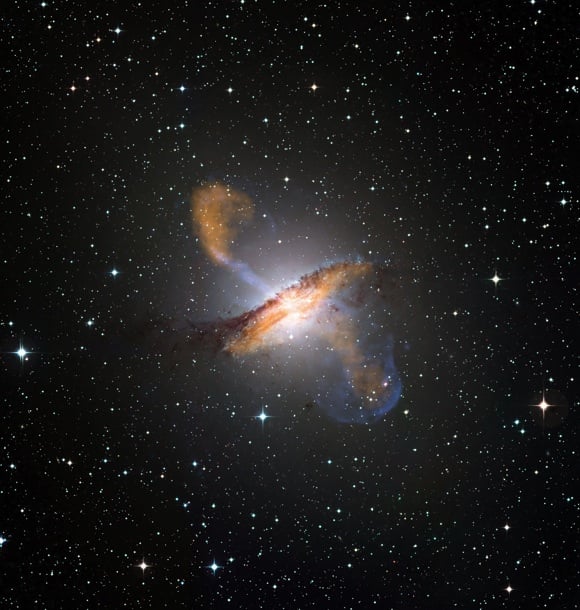 The closely circling black holes are in a galaxy more than four billion light years away and are the tightest trio ever spotted by scientists. Finding three supermassive black holes together is not that unusual, but the discovery of this lot indicates that the situation may be even more common than previously thought.

Galaxies often form from mergers of other star systems, so for a galaxy to end up with more than one supermassive black hole at its heart is not uncommon. Boffins currently know of four triple systems, but the closest pairs in those systems are around 7,825 light-years apart.

In the system affectionately and tongue-twistingly known as SDSS J150243.09+111557.3, the closest black holes are so near to each other, researchers originally the pair of them were one hole.

However, using the European VLBI Network, a group of astroboffins figured out that there were really three of the huge black holes, with two of them just 455 light years away from each other. That makes them the second-closest pair of supermassive black holes ever known.

"What remains extraordinary to me is that these black holes, which are at the very extreme of Einstein's Theory of General Relativity, are orbiting one another at 300 times the speed of sound on Earth,” said Roger Deane of the University of Cape Town, the lead author of the study.

Merging black holes like these are important to General Relativity because the theory predicts that they are the source of “gravitational waves” in the Universe – ripples across space-time – which they emit as they get violently colliding and merging with each other.

“General Relativity predicts that merging black holes are sources of gravitational waves and in this work we have managed to spot three black holes packed about as tightly together as they could be before spiralling into each other and merging,” said Oxford University physics professor Matt Jarvis.

“The idea that we might be able to find more of these potential sources of gravitational waves is very encouraging as knowing where such signals should originate will help us try to detect these ripples in space-time as they warp the Universe.” 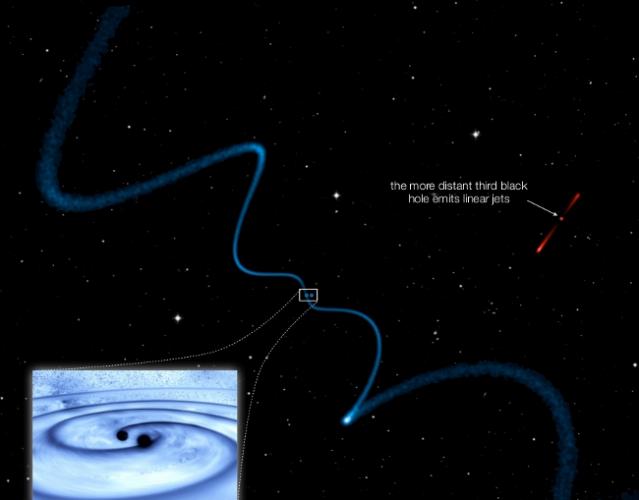 Closely orbiting pair of black holes spurt out wavy jets while the third one minds its own business. Credit: Roger Deane/NASA Goddard

The researchers were only able to spot the trio using a technique called Very Long Baseline Interferometry (VLBI). The technique uses signals from a network of telescopes up to 10,000km apart in order to see detail 50 times finer than that possible with the Hubble Space Telescope.

"Using the combined signals from radio telescopes on four continents we are able to observe this exotic system one third of the way across the Universe. It gives me great excitement as this is just scratching the surface of a long list of discoveries that will be made possible with the Square Kilometre Array (SKA)," Deane said.

The SKA, a telescope system that’s currently being developed, is being designed with this kind of technique in mind, according to Keith Grainge of the University of Manchester. With the SKA network, the African VLBI Network and other future radio telescopes, the boffins reckon they will be able to find more of these systems and figure out more about how black holes are shaping the Universe.

"VLBI is widely recognized as one of the best ways to confirm close-pair black hole systems, but the main difficulty has always been pre-selecting the most promising candidates. Our research shows that close-pair black holes may be much more common than previously thought, although their detection requires extremely sensitive and high-resolution observations,” said co-author Zsolt Paragi from the Joint Institute for VLBI in Europe (JIVE).

“We have always argued that next generation radio telescopes such as the SKA should operate in VLBI mode as well, jointly with existing radio telescope arrays. This will allow to broaden our understanding of how black holes grew and evolved together with their host galaxies."

The full study, "A close-pair binary in a distant triple supermassive black hole system", was published in Nature. ®