The 64-page report (PDF) explains that just seven “handshakes” between the plane and satellite systems are being analysed.

The analysis is extensive: The UK Air Accidents Investigation Branch, Boeing, Australia's Defence Science and Technology Organisation, Malaysia's Department of Civil Aviation, Inmarsat, the USA's National Transportation Safety Board and Thales have all worked on the available data in an attempt to determine where best to search for the missing 777.

Here's how the report says the channels are used by planes in flight:

“In order to connect to the SATCOM system, the aircraft transmits a ‘log-on’ request on the R-Channel which is acknowledged by the ground station.

Once connected, if the ground station has not heard from an aircraft within an hour, it will check that the connection is still operational by transmitting a 'Log-on Interrogation’ message on the P-Channel using the aircraft’s unique identifier.

If the aircraft receives its ‘unique identifier’, it returns a short message on the R-Channel that it is still logged onto the network.”

The R-Channel, the report goes on to say, also produces data called the “burst timing offset (BTO)” and “the burst frequency offset (BFO)”. The BTO records “the delay between when the transmission was expected (given a nominal position of the aircraft) and when it actually arrives and is caused by the distance of the aircraft from the satellite”. The BFO “is the recorded value of the difference between the received signal frequency and the nominal frequency at the Ground earth station.”

Measuring the difference between actual BTO and BFO and expected values is giving searchers the chance to calculate where MH370 was, as longer or shorter transit times hint at location.

But searchers have just seven handshakes to work with and The Reg understands that there are not many tens of bytes in each, so there's precious little data to work with.

Handshakes one and seven are of most interest, because both were initiated by MH370.

“A log-on request in the middle of a flight is not common and can occur for only a few reasons,” the report suggests. “These include a power interruption to the aircraft satellite data unit (SDU), a software failure, loss of critical systems providing input to the SDU or a loss of the link due to aircraft attitude.”

Both handshakes are suspected as resulting from an interruption of power supply to the SDU. The first, perhaps, because of some disruption to power flow. The seventh is suspected as having been made after the craft ran out of fuel and is therefore of great interest to searchers.

As a result of all that work, the ATSB has published the map below outlining a new search area. 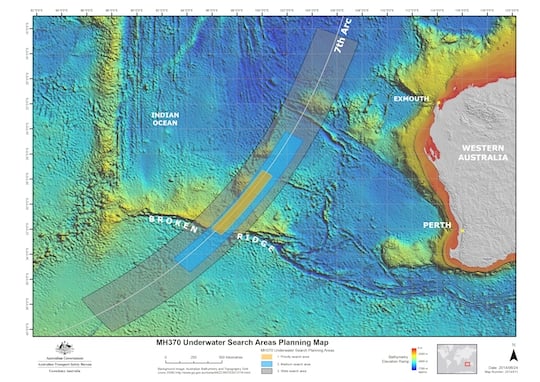 MH 370 is out there somewhere. The ATSB offers this map in colossal size here

Worryingly, the ATSB isn't sure of the new analysis, writing that “Work is continuing with refinements in the analysis of the satellite communications data” and that “Small frequency variations can significantly affect the derived flight path.”

“This ongoing work may result in changes to the prioritisation and locale of search activity.”

Searchers have sought new underwater mapping capabilities, as much of the search is not well-recorded. New maps will help later scans to spot MH-370-shaped debris on the ocean floor. The process of creating new maps and searching the candidate area is expected to start in June and require about three months to complete. ®